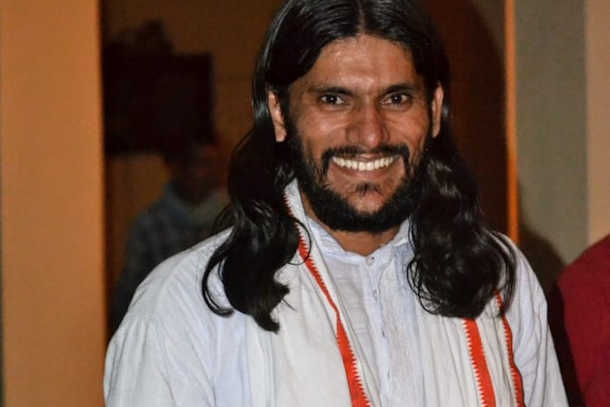 A file photo of Father Vineet Vincent Pereira of Varanasi who was attacked by a hardline Hindu youth group and was later arrested by police based on a complaint made by the same group. (Photo courtesy of Varanasi Diocese)

A Catholic priest has been arrested on false charges after being beaten up by a hard-line Hindu youth group in India's Uttar Pradesh state.

Father Vineet Vincent Pereira of Varanasi told ucanews.com that members of Hindu Yuva Vahini (youth force) came to his ashram in Gohana town in Mau district on Nov. 15 and attacked some of the elderly people living there with him.

"When I objected, they beat me. One pulled me down holding my hair and dragged out. Then they hit me left and right," he said. Those gathered around rescued him, said Father Pereira.

Not long after the attack, police arrived and arrested him based on a complaint made by his attackers on charges of rioting and disturbing public peace. If found guilty, each charge carries a maximum jail term of two years.

A local court bailed the 43-year-old priest on the same evening.

Father John Abraham, the diocesan vicar general, told ucanews.com that the Hindu group must have been angry over Father Pereira's popularity with Hindus who identify themselves as Christ Bhaktas (devotees of Christ).

Father Pereira lives a hermit-like existence and regularly conducts prayers for around 1,500 of these people at his ashram, said Father Abraham. "None of them have become Christians, but they follow Christian spiritual values."

Father Pereira said some of those attending his prayers were healed of sickness which attracted more people — almost all Hindus — to the prayers.

The priest said he used to conduct prayer meetings in nine villages but after four attempted attacks on him the prayers were limited to his ashram.

The Hindu Yuva Vahini youth group was founded in 2002 by the state's chief minister Yogi Adithyanath, a Hindu ascetic-turned-politician. Reconversion of Christians back to Hinduism is reportedly part of the youth organization's aims.

Father Abraham said the attack is part of an ongoing campaign against Christians in the state, which has seen a rise of anti-Christian sentiment since the pro-Hindu Bharatiya Janata Party (BJP) came to power in March 2017.

Hindus dominate Uttar Pradesh's 204 million people while Christians make up a tiny minority of just 0.18 percent of the population.

There have been 44 anti-Christian incidents in the past two months, while only 71 such incidents were documented across India, according to the Religious Liberty Commission of Evangelical Fellowship of India.

Uttar Pradesh police charged more than 270 Christians with "spreading lies about Hinduism and drugging people to try and convert them to Christianity" in September.