Henan suppression is 'systematic and planned' 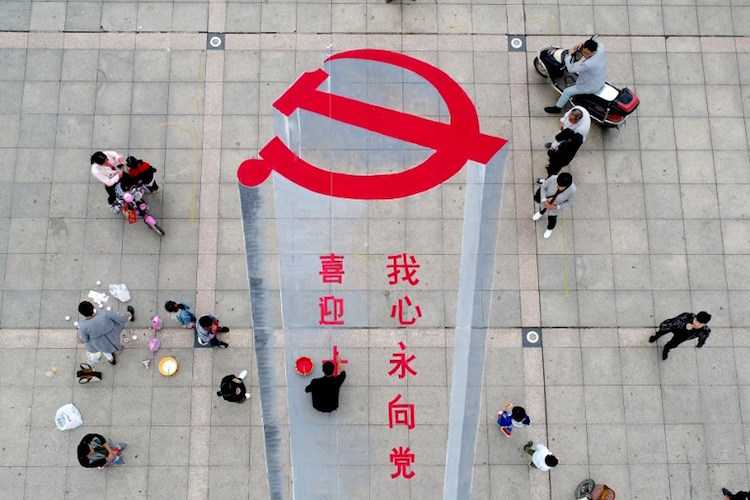 This photo taken on Oct. 6, 2017 shows a man working on a 3D street painting of the emblem of Chinese Communist Party in China's central Henan province. In 2009, the Christian population in Henan was 2.4 million, of which 300,000 were Catholics. (Photo by AFP)

Concern in Beijing about the growing influence of Christianity triggered a recent escalation of repression against Christians in China's Henan province, according to a leading Hong Kong academic.

The recent crackdown on various Catholic and Protestant communities was the result of more than two years of organization and preparation at provincial, city and county level through the Chinese Communist Party's increasingly powerful United Front Work Department, Professor Ying Fuk-tsang, director of the Divinity School at the Chinese University of Hong Kong told ucanews.com.

Referring to events in Henan — the Chinese province with the most Christians — where churches were seized, kindergartens closed and children prohibited from attending Mass and church services, Ying said he examined reports by Communist Party organs and government bodies related to religion.

The convening of the Central United Front Work Department conference (May 2015) and the National Conference on Religious Work (April 2016) indicated that the Communist Party had taken a new direction on religion.

New policies across "various provinces were then implemented according to their unique circumstances," he said in a Facebook post on April 28.

In April 2016, the Henan Provincial Religious Affairs Bureau told a provincial standing committee meeting to implement "the spirit" of the National Religious Work Conference, and in December, held training classes for all officials on how to go about it.

In February 2017, another United Front Work conference was held in Henan by the provincial government. Meanwhile, a research group, headed by Zhu Weiqun, director of the Ethnic and Religious Affairs Committee under the National Committee of the Chinese People's Political Consultative Conference, held a symposium to study "How to implement the spirit of the National Religious Work Conference at grassroots level".

In September 2017, the Henan Provincial Standing Committee convened a meeting to convey the "message of learning the spirit of the conference" held by the Central United Front Work Department and the State Religious Affairs Bureau.

More recently, on Jan. 16 of this year, Jia Ruiqin, director of the Henan Provincial Religious Affairs Bureau, hosted a working meeting to convey the message of studying the spirit of the National Conference of Religion Directors held in Beijing on Jan. 8.

When the controversial revised "Regulations on Religious Affairs" took effect on Feb. 1, the provincial ethnic and religion committee launched "a large-scale study" which marked the beginning of a fresh crackdown in Henan.

Meanwhile, Sun Shougang, a member of the provincial standing committee and head of the Henan Provincial United Front Work Department, visited the Provincial Ethnic and Religious Committee to exchange ideas and stress the need to pursue policies with "political commitment," according to Ying.

According to Ying, since March 2017, various other conferences on religious affairs and United Front tasks have been held in cities across the province.

"The administrative regions [including cities, counties and districts] directly under the jurisdiction of the municipalities continued to hold conferences and workshops to mobilize people to strengthen religious work," he said.

Ying said the suppression of Protestant Churches and the Catholic Church across Henan in recent months should not be seen as "individual incidents" or passed off as excessive acts by individual cadres at grassroots level.

"A picture has been revealed of policy conveyance down from 'central to provincial [Henan] — city and county — and then on to grassroots level [village, town, community and street]'," Ying said.

"A comprehensive strengthening of the party's grip over religion and religious affairs is actually the core element of a new religious policy," he said.