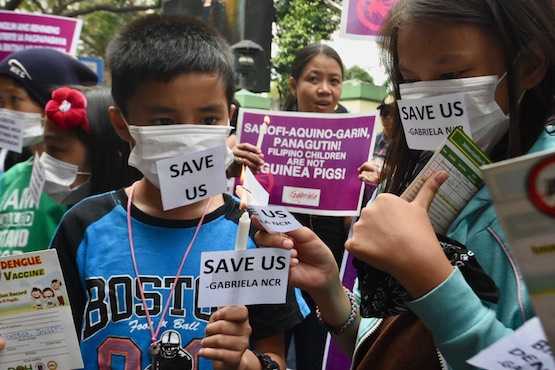 Filipino children who were given the controversial anti-dengue vaccine join a protest rally in Manila on Feb. 7 to appeal for financial and medical assistance from the government. (Photo by Angie de Silva)

Filipino women activists have demanded immediate financial and medical assistance for families of children injected with a controversial dengue vaccine.

Last year, Sanofi Pasteur, manufacturer of Dengvaxia, announced that its vaccine should not be recommended to individuals if they have never been infected with the dengue virus.

The announcement sparked a major health scare after the government admitted that about 830,000 Filipino children were given the vaccine.

Women's group Gabriela led a protest rally on Feb. 7 outside the Health Department in Manila to demand "full accountability" from all those involved in the Dengvaxia controversy.

Group spokeswoman, Cora Agovida, said that contrary to government claims, the parents of the vaccinated children continue to pay for the laboratory tests and medications of their children.

"The expenses are an added burden, especially with the trauma the families are suffering due to the questionable vaccine," said Agovida.

The protesters slammed the government for its "lack of relevant support and assistance to the children's families.

Last month, Bishop Ruperto Santos of Balanga demanded the prosecution and punishment of government officials responsible for the US$68 million worth anti-dengue vaccine.

At a congressional inquiry on Feb. 6, government health experts tried to allay public fears over the controversial vaccine.

They said it was not yet proved that the vaccine caused many of the reported deaths linked to Dengvaxia.