Some 20,000 people reportedly become Catholics on the mainland but some dioceses were still compiling their figures There were 4,446 new Catholics baptized in China's northern Hebei province during Easter, the highest amount in the country during the same time.

Hebei is the largest Catholic province in China with nearly 1 million Catholics and is a stronghold of the underground Catholic community. Shaanxi, Shanxi and Zhejiang are also traditional Catholic provinces, each with more than 200,000 Catholics.

Eleven other provinces had a few hundred new Catholics whereas the Tibet autonomous region, where 92 percent of the population are Tibetan and the majority are Buddhist, and Hainan province had one and eight baptisms respectively.

The church in Hainan administered baptism during the two most important church feasts each year: Easter and Christmas.

"Our Catholics are fluid. Half of them are what we dub 'migratory birds' as they come from the north to this southernmost province only for winter," Father Zhang Wenmin of Hainan told ucanews.com.

"They were given three month's systematic catechism education before we decided they were fit for baptism," the priest said.

A preliminary report showed 19,087 people become Catholics over Easter as some dioceses were still compiling their figures as of April 25, according to Hebei Faith Press, which collected the figures.

"We have tried our best to collect figures from both open and underground communities," said Father Li Rongpin, chief editor of Hebei Faith Press.

In the statistic table, Kaifeng was the only diocese in Henan that had no baptisms. Father Han Zhentao of Kaifeng told ucanews.com he baptized two children and six adults in his parish this year but was unable to submit the figures before the deadline. Why are most of China's Easter baptisms adult? 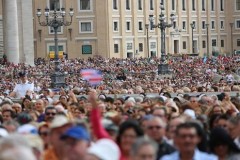 "The growth is more or less the same as last year when I baptized 10 new faithful. Some of them were introduced to the church through their friends and some were converts from the Protestant church as they felt Catholicism suited them more," said Father Han.

Christian scholars and official Protestant church bodies agreed that Henan province has the highest Protestant population in China. However, the estimated figure varies from two million to nearly five million as many belong to the unregistered house churches.