Healthcare by numbers: using mobile phones to save lives 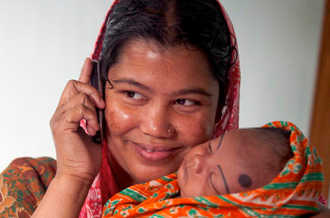 By Patricia Mechael and Sarah Struble

Mobile phones: you see them being used in airports, at the grocery store, on subways and buses, and even in the hand of your doctor. In fact, it is difficult to go anywhere these days without seeing someone use a mobile phone. That should not be surprising considering that, according to the International Telecommunications Union (ITU) of the United Nations, there were almost six billion mobile phone subscriptions by the end of 2011 - the same year the world's population hit seven billion.

The ubiquity of mobile phones has not gone unnoticed by development and global health experts. These experts, along with entrepreneurs and innovators, have formed a movement - commonly known as mobile health or mHealth - to harness the potential of mobiles to improve health outcomes.

mHealth can be defined as medical and public health practices supported by mobile technologies, such as mobile phones, patient monitoring devices, tablets, personal digital assistants (PDAs), and other wireless devices. Patients, providers, health administrators, and public health advocates can all use mHealth to strengthen health systems by improving health services and expanding their reach.

There are several opportunities for mHealth to transform healthcare systems, particularly in developing countries, where public health information and access to health services are severely limited by the lack of facilities, trained personnel, and supplies. First, mHealth can create critical efficiencies in health delivery - be it through accessing electronic health records or remote monitoring of patients. Second, mHealth enables access to health information and services in remote and resource-poor settings.

Last year, the ITU estimated that almost 75 percent of mobile subscriptions were in developing countries, a figure that far exceeded fixed phone line subscriptions and internet users. Healthcare costs are rising worldwide while both communicable and noncommunicable diseases (NCDs) are growing concerns for health ministries. According to the World Health Organization's Global Status Report on Noncommunicable Diseases that was released earlier this year, of the 57 million global deaths in 2008, NCDs were responsible for 36 million (63 percent). These deaths were primarily the result of cardiovascular diseases, diabetes, cancers, and chronic respiratory diseases. While it is popularly believed that NCDs are most common in high-income countries, 90 percent of NCD deaths occur in low- and middle-income countries.

Developing countries are hit hardest because while NCD rates are increasing, the rate of infectious diseases, such as HIV/AIDS and malaria, remain high. This problem is exacerbated by the fact that in these countries, public health and access to health services is limited by lack of facilities, trained personnel, and supplies, among other health systems challenges.

We are fortunate that a solution rests literally in the hands of the majority of the world's population.

Programmes have been most successful and influential in developing countries. This may be due to the lack of infrastructure and health workers, increased rates of infectious diseases, and high rates of mobile phone use.

The role of mHealth

The flexibility of mHealth has afforded it a wide and growing range of innovative applications. For example, mHealth can be used for education and awareness through text messaging that supports broader public health and behavioral change campaigns. It is a useful tool for diagnostic and treatment support, as mobile phones can guide the decisions of healthcare providers and serve as point-of-care support tools.

Mobile phones can also send and receive data on disease incidence and public health emergencies, which helps to track disease and epidemic outbreaks. Mobile tools can manage supply chains by monitoring stock levels and combating the distribution and sale of counterfeit pharmaceuticals. Real-time patient data can also be collected remotely with mobile applications. Finally, mobile devices can train health workers and improve health worker communication of and access to information.

Most immediately, mHealth provides education and awareness through interactive public health messages, often targeted toward individuals at risk for certain health conditions. The Mobile Alliance for Maternal Action (MAMA) is a perfect example. This public-private partnership between Johnson & Johnson and USAID, with the support of the United Nations Foundation, mHealth Alliance, and BabyCenter, provides health information to expectant and new mothers who, along with their children, are at risk for complications and death during pregnancy and childbirth.

The messages are developed around "age and stage", meaning they follow the expectant mother's pregnancy and provide her and her family with messages that are appropriate for that particular point in the pregnancy, as well as the baby's first year of life.

The messages used by MAMA are adaptable and allow for cultural and linguistic sensitivities. To accommodate the potential barrier of illiteracy, the messages are delivered either as a text message or an audio recording. Where dialects are strong, the messages can be re-written or re-recorded to ensure the information is delivered in its most easily understood form.

MAMA has also opened its entire messaging library so that other organizations can replicate the initiative and improve health for mothers and their babies in other areas. Through the adaptive messaging programme, MAMA's vital and culturally sensitive health messages are now reaching new and expectant mothers in 35 countries, from Afghanistan to Zambia, with a projected reach of over 20 million moms.

In terms of diagnostic and treatment support, mobile phones can collapse geography and link medical experts with health workers to create virtual healthcare teams for the management of specific cases. For example, in Tanzania, D-Tree International is using mobile phones to help promote proper child healthcare and reduce the number of children - estimated at 10 million worldwide - who die each year from preventable or treatable causes.

The WHO's Integrated Management of Childhood Illness (IMCI) protocol sets standards for classifying and treating common causes of death, such as pneumonia, diarrhea, malaria, measles, and malnutrition. D-Tree's programme has improved the flexibility and use of IMCI protocols by making them available on mobile phones and other devices.

Full Story: Wellness by number: How mobile phones save lives