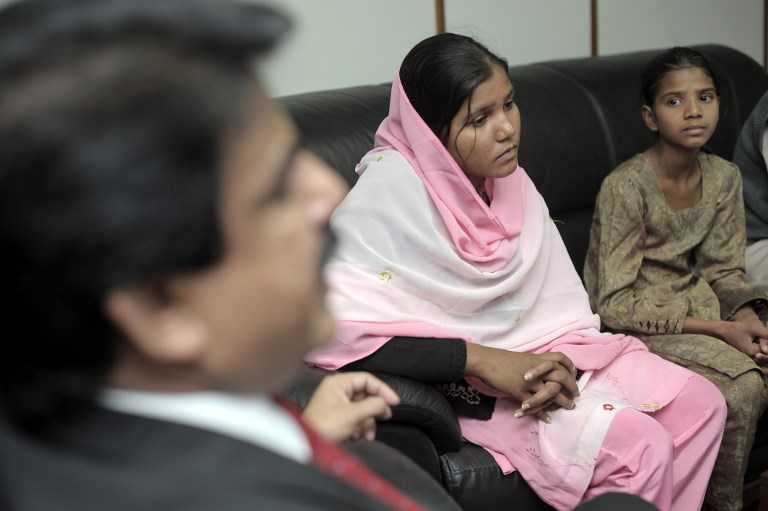 Sidra, center, and Esham, the daughters of Asia Bibi, a Christian mother sentenced to death, listen to Pakistani Minister of Minority Affairs Shahbaz Bhatti in Islamabad on Nov. 24, 2010 in this file photo. Asia Bibi has been sentenced to hang in Pakistan after being convicted of defaming the Prophet Mohammed. (Photo by Farooq Naeem/AFP)

The Colosseum in Rome was lit up in red on Feb. 24 as a sign of solidarity and support for persecuted Christians around the world.

The event, organized by Aid to the Church in Need, a Pontifical Foundation that supports suffering Christians in over 140 countries, included testimonies of families who have been targeted for their Christian faith.

These included the husband and youngest daughter of imprisoned Asia Bibi of Pakistan, who received a death sentence in 2010 for alleged blasphemy. Reports claim she has also been tortured in jail.

During the private meeting in the Vatican, Pope Francis prayed together with those present. The pope told the daughter: "I think often of your mother and I pray for her."

Asia Bibi, a 52-year-old Catholic mother of five, was a fruit picker from Sheikhupura, a town in Punjab. Her sentence is based on the allegation that she insulted the Prophet Mohammad during an argument with Muslim farm workers over a glass of water.

She has pleaded innocent and challenged her conviction in the highest court after the Lahore High Court chose not to overturn the earlier ruling.

However, her appeal has been pending in the Supreme Court since November 2014.

The case was briefly picked up on Oct. 14, 2016 before a three-judge bench that was due to hear her appeal was dissolved.

Pakistan's top judge has issued over two dozen suo motu (on its own motion) notices in a month on a range of issues including extrajudicial killings, security barricades, child abuse, VIP movement, human rights, money laundering and the state of health facilities in the country.

Justice Mian Saqib Nisar was sworn in as Chief Justice of the Supreme Court of Pakistan on Dec. 31, 2016.

Ever since his elevation as the chief jurist, Justice Saqib Nisar has fallen under the media spotlight due to his regular notices being dubbed matters of public importance.

Despite this record-breaking suo motu spree — comparable to a government agency "acting on its own cognizance — the case of Asia Bibi has failed to draw the attention of Nisar. The media in Pakistan are increasingly railing against unfair blasphemy cases, such as the one against Asia Bibi. This photo shows local journalists taking images of the court verdict on Feb. 7 against suspects in another case. A Pakistani court sentenced one person to death and five others to life imprisonment for lynching a student accused of blasphemy in a highly-charged case that sent shockwaves through the conservative Muslim country. (Photo by Aamir Qureshi/AFP)

Justice Iqbal Hameedur Rehman, a member of the bench, recused himself from Asia Bibi's appeal citing a possible conflict of interest.

"I heard the murder case of former Punjab Governor Salman Taseer so it would be inappropriate for me to hear this case," he said.

The liberal governor was gunned down by his Elite Force guard just days after he met Asia Bibi in prison and spoke out against the misuse of current blasphemy laws.

Asia Bibi's appeal was referred back to the then-chief justice of Pakistan. A new date for the hearing has yet to be set.

Ironically, Nsiar was part of the previous bench that was dissolved. And just six weeks later he was appointed chief justice of the Supreme Court.

Since then Asia Bibi's family has been waiting anxiously for her hearing to resume. Several requests by her counsel to reopen the appeal have been turned down by the court. The last desperate attempt by Asia Bibi's family to have the case reopened came earlier this month, when her husband and children went to the Supreme Court.

Asia Bibi's husband and two daughters, and their counsel Saiful Malook, met Additional Registrar (Judicial) Muhammad Ali and requested he arrange a meeting with the chief justice of Pakistan, the Express Tribune reported.

Malook told the local daily the family was not allowed to meet the chief justice. Asia Bibi's daughters requested an early decision in the case due to the rapidly worsening state of their mental health.

The lawyer, Malook, said the apex court office had told them several times that the date of the hearing would be fixed soon. Even last year, he added, the court office had assured them the date would be clarified by the end of December 2017. But that promise was not kept.

This incomprehensible delay has been perplexing and frustrating, to say the least. Nisar's own record since he was promoted to chief justice suggests he is someone who believes in dispensing speedy justice — yet he has failed to reopen Asia Bibi's case.

The Supreme Court is approached as a last resort by litigants, especially vulnerable minorities and those who cannot afford to hire expensive lawyers.

And in a case as sensitive as blasphemy, it would only be fair to expect swift action from such a prestigious court.

In 2016, the Supreme Court of Pakistan ruled that individuals accused of blasphemy often suffer disproportionately due to the absence of adequate safeguards against the misapplication or misuse of blasphemy laws.

In 2015, a study by the ICJ on the implementation of blasphemy laws in Pakistan found that the acquittal rate for cases which fall under sections 295-A (outraging religious feelings) and 295-B (desecrating the Quran), 295-C (defiling the name of the Prophet Mohammad) and relate to blasphemy are surprisingly high: Out of the 12 reported cases since 1986 that were decided on merit by the high courts, only one conviction has been upheld. Punishments included life imprisonment or death.

"In more than 80 percent of reported cases, those accused of blasphemy are eventually acquitted on appeal, with judges expressly stating in a large majority of such cases that the complaint was fabricated and spurred on by personal vendettas," according to the report.

"At times, there is also evidence that the personal and religious predilections of judges mar the outcome of the trial, and the judges' bias against the accused, reflected both during trial and also in judgments, impedes on the defendant's right to be tried by an impartial court," it added.

The chief justice is well aware of the intimidation and harassment judges and lawyers face in blasphemy cases involving the lower courts.

Given the harsh nature of the blasphemy laws and that Asia Bibi has already served eight years in prison, her case is of paramount importance. And yet the Supreme Court continues to delay reopening her appeal.

All the chief justice needs to do is fix a hearing date for the appeal and let the law take its own course.

Heaven did not fall when the apex court upheld the death sentence for Mumtaz Qadri, the man who murdered Governor Salman Taseer.

Any further delay by the apex court will be a great injustice to Asia Bibi and her family, and to all those who still believe in the integrity and fairness of the top court.