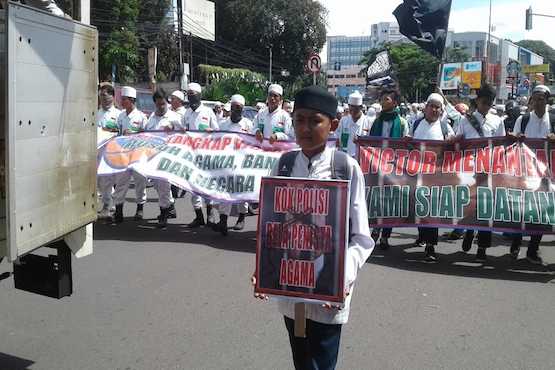 Hundreds of Muslims stage a protest in Jakarta on Nov.24 demanding that Christian legislator Victor Laiskodat be arrested for blasphemy.  (ucanews.com photo)

Hundreds of hard line Muslim groups in Indonesia have stepped up their demand for the arrest of a prominent Christian lawmaker for alleged blasphemy by staging a protest in Jakarta.

The case has been likened to that which saw the downfall of Jakarta's former Christian governor Basuki Tjahaja Puranama.

Hundreds of demonstrators from groups such as the Islamic Defenders Front (FPI) and Muslim People Forum (FUI) called for the arrest of Victor Laiskodat, a legislator of the National Democratic Party (NasDem), part of government coalition, at the protest on Nov. 24.

Laiskodat, 52, was accused of blasphemy after a speech in Kupang, East Nusa Tenggara province, on Aug 1, 2017, went viral in social media.

During the speech he called on constituents to not elect candidates from "pro-extremist and pro-caliphate" parties.

Former Jakarta governor Puranama was jailed for two years earlier this year after similar accusations were leveled against him after a speech at the start of the last governor election campaign.

"We demand that police arrest Laiskodat and punish him because he is a provocateur, and this speech could divide the nation," protest organizer Slamet Ma'arif, told ucanews.com.

"Party leaders should not to protect him. Instead, they should bring him to justice," said Ma’arif, who is also a spokesman of the FPI.

He threated more mass rallies if Laiskodat was not arrested.

So far Laiskodat has not commented on the protest against him.

His party however, has denied Laiskodat’s speech was blasphemous and that the Christian lawmaker was being made the victim of a witch-hunt.

"His speech wasn’t by any means provocative and the [circulated] video has been edited and is not the original version," NasDem central executive board chairman, Zulfan Lindan said.

Observers, however, believe the accusation against Laiskodat is groundless.

According to Adrianus Meliala, a criminologist at the University of Indonesia, Laiskodat did not commit blasphemy, unlike Puranama who quoted biblical texts.

"It’s a political matter, and it would be difficult for police to proceed with this. Laiskodat only criticized political parties," Meliala said.