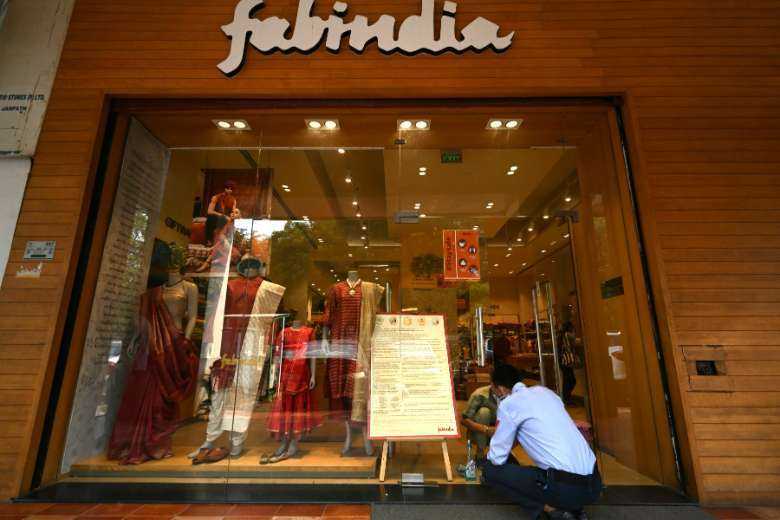 A private security guard works at a Fabindia shoowroom at a market in New Delhi on Nov. 1. (Photo: AFP)

India's biggest festive season is in full swing but top brands are under pressure from right-wing hardliners accusing them of hurting Hindu sentiments.

Critics say an atmosphere of growing religious intolerance and fear since Hindu nationalist Prime Minister Narendra Modi came to power in 2014 is behind the rise in social media vitriol and physical attacks on minority groups.

Clothes and furniture retailer FabIndia and wellness firm Dabur had to pull adverts in the busy shopping period ahead of Diwali, the Hindu festival of lights later this week.

Urdu is one of India's 22 official languages but uses a Persian-Arabic script and is considered a "Muslim language". While Urdu originated in India, which is home to nearly 200 million Muslims, it is also the national language of bitter rival Pakistan.

Many devout Hindus believe it should not be used for their rituals and festivals.

In the context of making heritage and culture a dynamic conversation, the Mangalsutra campaign aimed to talk about inclusivity and empowerment

Others were outraged that women featured in the advert were not wearing a bindi, a decorative design with religious significance often adorned by Hindu women on their foreheads. Soon, the hashtag #NoBindiNoBusiness began to trend on Twitter.

FabIndia insisted the collection was not for Diwali and said it has "always stood for the celebration of India with its myriad traditions in all hues."

Dabur's advert courted controversy by showing two women in a same-sex partnership celebrating "Karwa Chauth" -- a festival in which married Hindu women pray and fast for the longevity of their husbands.

Designer Sabyasachi Mukherjee, whose creations are popular with top Indian celebrities such as Priyanka Chopra Jonas, was next.

Narottam Mishra, the home minister in the central Indian state of Madhya Pradesh, called it "objectionable and obscene" and threatened to have Mukherjee arrested.

His Sabyasachi label pulled the ad late Sunday, saying it was "deeply saddened that it has instead offended a section of our society."

But it added: "In the context of making heritage and culture a dynamic conversation, the Mangalsutra campaign aimed to talk about inclusivity and empowerment."

Clothing brand Manyavar too had to roll back its campaign after one of its ads featuring Bollywood A-lister Alia Bhatt appeared to question a traditional wedding ritual.

The latest incidents come after jewellery brand Tanishq, owned by the Tata conglomerate, was last year forced to withdraw an advert showing an interfaith couple at a baby shower organised for the Hindu bride by her Muslim in-laws.

The brand was accused of glorifying "love jihad" -- a term coined by nationalist extremists to accuse Muslim men of seducing Hindu women and forcing them to convert -- a flashpoint issue in the officially secular country.

The brand faced a backlash on social media and a store manager in Modi's home state of Gujarat was forced to write an apology note by men who stormed into his shop.

The pendulum is swinging towards right-wing attitudes, which has become sort of legitimate because of the right-wing government

A spate of incidents have been taken place in the real world and not just on social media, including attacks on Muslims and lower-caste Hindus for cow slaughter, or vandalism of churches.

Even entertainers have felt the heat with three shows in Mumbai featuring comedian Munawar Faruqui cancelled last week after Hindu right-wing outfit Bajrang Dal threatened to burn down the venues.

Faruqui, who was arrested in January in a case accusing him of insulting Hindu gods and goddesses, told NDTV in an interview Monday that he gets "50 threat calls daily".

Last month, Bajrang Dal members ransacked the set of web-series "Ashram" in Madhya Pradesh and threw ink on producer-director Prakash Jha, accusing him of showing Hindus in a wrong light.

"Because of the silence at the top both in the government and the party, people at the lower end, the rank and file, feel they can flex their muscles and indulge in such ruffian behaviour," political analyst Parsa Venkateshwar Rao told AFP.

"The pendulum is swinging towards right-wing attitudes, which has become sort of legitimate because of the right-wing government."