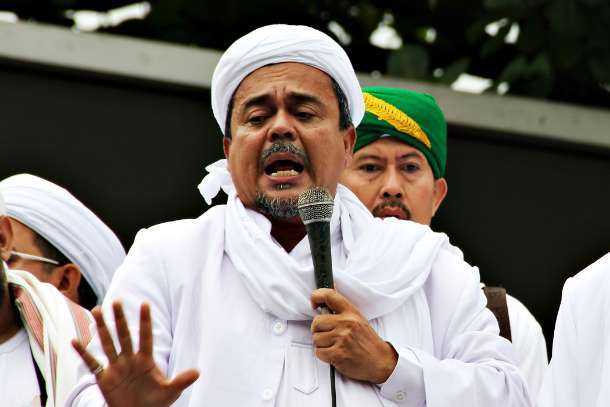 The leader of a notorious Indonesian hardline Islamic group who fled the country several years ago to avoid a sex charge has returned home from self-imposed exile to a rapturous welcome in Jakarta.

Thousands of people defied pandemic warnings on Nov. 10 to welcome Muslim cleric Muhammad Rizieq Shihab of the Islamic Defenders Front back to Indonesia from Saudi Arabia, where he had fled in 2017 to avoid a pornography case in which he was accused of exchanging lewd texts and pictures with a woman. The charge was later dropped.

After landing and greeting his supporters, Shihab headed to Petamburan in Jakarta, the headquarters of his organization, which has become notorious for targeting religious minorities and attacking free thinkers, often violently.

Shihab arrival followed several reported attempts to return hope which he said were aborted because of pressure from the Indonesian government.

“He has the same legal rights and obligations as other citizens,” he said.

Although the sex charge was dropped, Catholic groups say Shihab still has cases to answer after having been accused by the Catholic Student Association of ridiculing the birth of Jesus in a speech that was widely circulated on the internet shortly before he fled.

Petrus Selestinus, a Catholic lawyer who reported Shihab to the police, told UCA News that this case must be followed up by law enforcement.

"We hope that all cases involving him will be reopened," he said.

He said the authorities need to explain to the public the status of the cases reported against him so that there is “no suggestion that the law is blunt against people who have mass support.”