For one tailor in Manila, praying to the Santo Nino and a great deal of perseverance have paid off 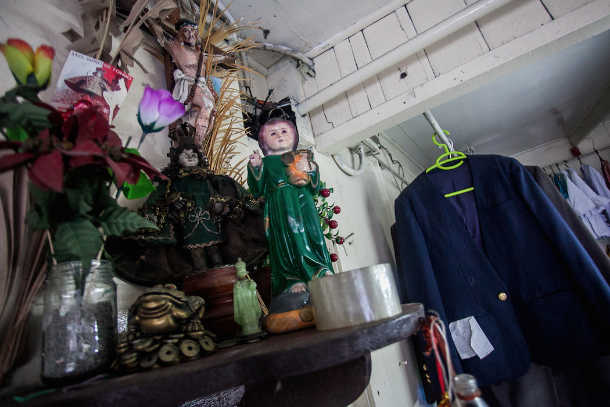 An altar inside Virgilio Oracion's workshop in Manila bears an image of the Child Jesus. (Photo by Mark Saludes)

Virgilio Oracion, a 59-year-old tailor in Manila, believes in luck, but also admits that "hard work and perseverance" are necessary for success.

Sewing machines, boxes of fabric and thread, and clothes and dresses of his clients are scattered all over his workshop.

On an altar in one corner stands an image of the Child Jesus, popularly known in the Philippines as the Santo Nino.

"They say it's for good luck," says Oracion.

His Santo Nino wears a green robe because "green is the color that invites wealth and money for businesses."

He says everything he has came from his shop. "I don't have much but I can say that my family and my workers are not starving."

"I pray to the Santo Nino for blessings and ask God for guidance," says the tailor.

"But I think what I have right now came from hard work, discipline, and persistence."

He says "prayers must come with actual work."

"Faith must be accompanied with dedication and a drive to achieve things that you prayed for."

In many business establishments, even in public utility vehicles, a picture or Santo Nino image is a common sight.

The Filipino people's devotion to the Child Jesus is as old as Christianity in the country.

The first image was brought to the Philippines by Portuguese explorer Ferdinand Magellan who gave it to the queen of the island of Cebu as a gift when she was baptized as a Catholic.

"The Filipino people's devotion is a celebration of the birth of Christianity in Asia," says Sister Arlyne Casas, a nun of the Our Lady of Sion congregation.

The image of the Santo Nino of Cebu is one of the oldest surviving Catholic relics in the country.

"Its history is the history of how Catholicism was brought to this part of the world," says Sister Casas.

The image is considered the most famous religious icon in the Philippines.

Professor Jayeel Serrano Cornelio, who teaches sociology of religion at Ateneo de Manila University, notes that the devotion to the Santo Nino is "sometimes misunderstood as fanaticism."

"Most of the time it is called popular religiosity," he says. "But there is no false practice of faith in those kinds of expressions because these people believe in the same God."

Sister Casas says the "extreme devotion ... is a reflection of the present social and economic condition of the country" where people cling to faith and submit their life to the Divine Being "because they have no one else to rely on."

"We look at them as deliverers of luck or fortune," says the nun. "Faith also connotes hope, many of us find optimism in religious images," she adds.

Some look at the image of the Child Jesus as a "lucky charm." In Philippine tradition, children are seen as gifts and bearers of luck to the family.

As for Oracion, his expression of piety is to use his skills to work for the welfare of his family and the people who rely on him.

People can call it luck, or it can be a blessing from the Santo Nino, but for the tailor everything is the fruit of hard work made possible by God.