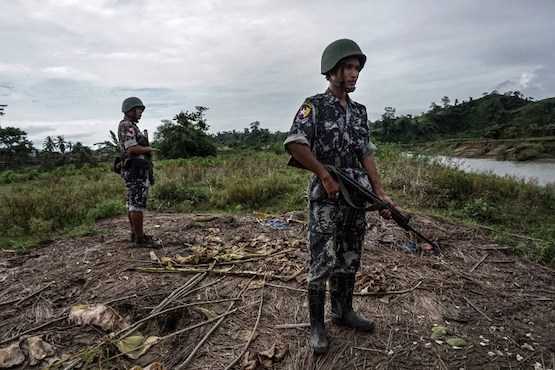 This photo taken on July 14 shows border police standing guard at Tinmay village, Buthidaung township in Myanmar's Rakhine State. Following the killings of seven Buddhists by suspected Rohingya militants in the state's north last month there have been calls to allow the formation of armed militias. (Photo by Hla Hla Htay/AFP)

The call to form militias came as more than 1,000 ethnic Rakhine — including Buddhist monks — rallied in 15 townships including Sittwe, the capital city of Rakhine, Aug. 13.

Soe Naing from the Rakhine Social Network in Sittwe said they are concerned the government is not doing enough to protect ethnic Rakhine in the state's north from Rohingya militants.

"We are disappointed over the government's handing on security issues so we call on them to allow the forming of local militias to defend and protect our ethnic people," Soe Naing told ucanews.com.

Tensions have risen in the volatile region after seven ethnic Rakhine Buddhists were killed in northern Rakhine last month. This  resulted in security forces upping their operations in the area and the imposing of curfew in some villages. The government said it had found forest encampments used by Rohingya militants who were responsible for the killings.

Pe Than, a lower house ANP lawmaker who attended the meeting, said the idea of local militia groups was discussed during the meeting.

"We are much concerned about the safety of ethnic Rakhine and other sub-tribe groups. Every villager needs to have a gun to defend themselves," said Pe Than, an ethnic Rakhine, told ucanews.com. Pe Than said Rohingya militants are in villages close to Rakhine villages.

Several militia groups operate in other troubled areas of Myanmar such as parts of Kachin and Shan states. These militias raise their own funds and are overseen by the Myanmar military.

The Arakan Army was established in 2009 to protect ethnic Rakhine people but the group is at odds with the government as it is a part of the Northern Alliance Burma that is currently fighting the military in Kachin and northern Shan states.

Myanmar's State Counselor Aung San Suu Kyi issued in a statement on Aug. 12 saying that extra forces had been sent to the Maungdaw area of northern Rakhine. [Action] will be taken against all extremists and those who abet extremism," said the statement.

Salin, a Muslim Rohingya in Maungdaw town, said the increased presence of government military and police has been distressing for his communities.

"Fears have grown especially in the villages. All these recent additional troop numbers are not a good sign for the safety and security of the Rohingya community," Salin told ucanews.com.

He said proposals made by Rakhine leaders to form militias could create unnecessary problems between the two communities.

Sectarian tensions between ethnic Rakhine and Rohingya Muslims have created a tinderbox. In October 2016, alleged Rohingya militants attacked police posts which resulted in a bloody crackdown by security forces that the U.N. said, "may amount to ethnic cleaning" of the Rohingya.

More than 75,000 Rohingya fled to neighboring Bangladesh where many recalled atrocities committed against them against such as rapes, murder and arson.

The four-month long military clearance operation ended early this year amid pressure from the international community and emerging reports of rights abuses by security forces.