Known as hijra, many flee home to save their families from shame and live in desperate poverty or slip into sex trade 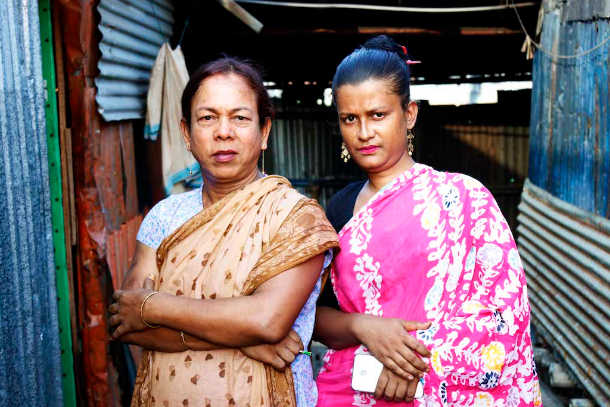 Over 40 years ago a self-described "unsuitable girly boy" fled her home in Dhaka to realize her "true" sexual identity and free her family from the shame and stigma of having raised a transgender in Bangladesh.

"The flight was inevitable and forever. My family was facing social humiliation because of me, so I thought it was best to leave to release them from the unendurable pain," Boby Hijra, 56, told ucanews.com.

Boby is a transgender and social activist based in the Boroitola suburb of the capital's Jurain area, where dozens of makeshift, tin-built houses offer low-cost accommodation for several hundred transgender people.

Transgender people are popularly known as hijra (which literally translates as "eunuchs") in Muslim-majority Bangladesh, as well as in other South Asian countries including India and Pakistan.

Hijra is an umbrella term for people who are born male but do not identify as either sex.

Boby now serves as director of the Sustho Jibon (Healthy Life) NGO, which offers medical assistance and advocates on behalf of transgender rights in Dhaka. It also offers free housing to 15 transgender people in the area.

She adopted the term as her surname to protect her family while also raising awareness of this persecuted class of people, who cannot easily be pigeonholed in any traditional gender-specific box. Taking hijra as a surname is a common practice among this group in Bangladesh.

Boby's life story exemplifies the pain, trials and tribulations that many members of the hijra community are forced to endure.

"My mother was quite accepting but my father was a religious-minded man, so it was hard for him to accept an unusual child like me," she said.

"He treated me as a boy and beat me regularly because I used to act more like a girl than a boy. I used to hang out mostly with girls even though my parents scolded me for that."

Her parents initially sought to "cure" Boby by sending her to a madrasa, or Islamic school, for religious education. There, she became a subject of mockery among other students due to her effeminate voice and appearance, which ultimately led her to drop out.

At her next school she faced the same level of humiliation, she said. "The other students called me ‘half-lady' and kept their distance. They used abusive words and sometimes assaulted me, all of which I found unbearable."

She fled her home and joined a group of hijra who earned money by singing and dancing at weddings and by performing folk plays known as yatra.

Sometimes they would beg money from pedestrians, businessmen and drivers on the streets of Dhaka, and berate and publicly shame those who refused.

Boby ditched all that nearly two decades ago after joining Sustho Jibon, but many hijra continue to resort to such antisocial tactics, claiming the social ostracism they face forces them to break the law to survive. "They are routinely denied an education and offers of employment. As such, many rely on odd jobs for survival. Some fall into the sex trade."

There are about 10,000 hijra living in Bangladesh, according to the Social Services Ministry. Boby claims the real number is 10 times higher as the vast majority keep their identity a secret.

Most live in extreme poverty as they are excluded from cultural, religious, political and professional spheres, she said.

Utpakhi Hijra, 31, fled her village in Comilla district years ago and now works with Boby. Utpakhi is the Bengali word for "ostrich."

She said she excelled at school during her early education and wanted to become a doctor, but the backlash against her sexual identity from classmates and teachers destroyed her dream.

The dean asked her parents to send her to another school. Even her brother struggled to find a wife through an arranged marriage as other parents did not want to be associated with a "hijra family," she recalls.

"Some even speculated that my brother's wife would give birth to a hijra child if they were to wed," Utpakhi said.

For years, transgender people and the aid groups that support them demanded legal recognition and their due rights. The government finally approved a law in 2013 recognizing them as "the third or separate gender."

This included a legal provision guaranteeing them education and employment opportunities. It also allowed them register to vote, obtain identity cards marking them as hijra, and receive limited welfare allowances. But while the law may have changed, people's attitudes haven't, Boby said.

"Hijra face abuse everywhere — teasing, tirades, beatings, sexual violence — because people consider us abnormal and cursed," she said. "Without a radical change in the public mindset, we will never get to enjoy a better quality of life."

The government has been implementing a project since 2012 to help raise their standard of living, according to Farhana Yeasmin, an officer at the state's social services department.

The program offers scholarships to hijra children, skills training to those aged 18 and over, and allowances for people older than 50, among other development and social security services.

"We are trying to integrate them into mainstream community by slowly diminishing the gaps and discriminatory attitudes," she said.

Caritas Bangladesh, the local chapter of the Catholic Church's charity arm, supports them through its Prochesta (Endeavour) project.

"About 60 hijra benefit from our project, which offers awareness about health, sexuality and alternative forms of employment," said project officer Farid Ahmed Khan.

"We are working to set up a specific project for hijra people, and a proposal has already been sent out to our donors. Hopefully, we can support them better in the near future."

Meanwhile, Caritas India announced plans in 2016 to begin recruiting transgender people to work in its organization as part of its efforts to stop the discrimination they face.

The Catholic Church supports their rights in principle but lacks the manpower to stand and work with them, said Holy Cross Father Liton H. Gomes, secretary of the Catholic Bishops' Justice and Peace Commission

"Societies look down on them, but the Church sympathizes with their plight," he told ucanews.com. "The government and NGOs like Caritas are working to break social and cultural barriers that block them from improving their lives. We hope one day they will gain their full rights."