Hard lessons from a dark past

Loss of childhood to Khmer Rouge is one lesson Magsaysay Award winner, Youk Chhang, says he can pass on to young people today 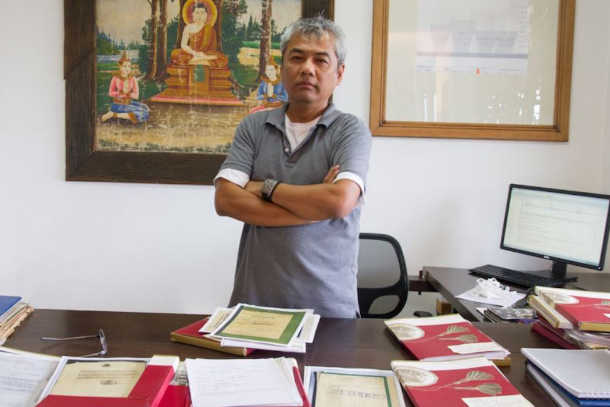 Youk Chhang, executive director of the Documentation Center of Cambodia, in this photo taken in 2015. (Photo by NeouVannarin/VOA Khmer)

"Whenever I meet young people I tell them: 'Ask me what I do not want to tell you,'" says 2018 Ramon Magsaysay Award winner, Youk Chhang, from inside his office in the heart of Phnom Penh.

For more than two decades, Chhang, 57, who survived the murderous Khmer Rouge rule that resulted in the deaths of around 2 million Cambodians in the late 1970s, has been documenting atrocities committed by Pol Pot's regime.

After losing dozens of family members including his father and five siblings during the civil war and at the hands of the ultra-communists, the now executive director of the Documentation Center of Cambodia (DC-Cam) escaped to a refugee camp near the Thai border before eventually managing to make it to the U.S. in the early 1980s.

Despite quickly settling into American life, Chhang says he was determined to return to his homeland.

"I told myself I will never go for a visit, I must return to work and do something that will make my mother proud of me," he recalls.

After initially working for the U.N., Chhang headed DC-Cam in 1995, when the centre was founded as a field office of Yale University's Cambodian Genocide Program to conduct research, training and documentation related to the Khmer Rouge regime.

When out in the field, Chhang would regularly be faced with former Khmer Rouge cadres, something that evoked powerful memories of his traumatic teenage years.

At the age of 15, Chhang was arrested for picking wild mushrooms for his pregnant sister — a serious "crime" under the extreme collectivisation of the Pol Pot regime. He was tortured in front of hundreds of people before being sent to an adult prison.

Every night in jail he would be forced to make "confessions" and ask for forgiveness. The "crimes" Chhang would confess to included dreaming of cold Coca Cola and missing his high school teacher.

After confessing, he would be ordered back to his cell where he would lie shackled on the insect-infested floor. He was later released on the request of an older prisoner, but Chhang later learned his fellow inmate was killed in exchange for his freedom.

One day in 1998, Chhang returned with DC-Cam staff to the district in Banteay Meanchey province where he had been imprisoned. He soon encountered four former prison guards from the jail.

"My staff looked at them as skinny old men with a few skinny buffalo living in poverty. My staff felt sorry for them but I'm upset because I expected them to be someone who tortured me 25 years ago; brutal, arrogant, muscular, aggressive, no respect," he says.

"Then I told my staff to turn off the recorder and I asked them questions."

The four former guards claimed they could not remember Chhang. However, he then recounted one infamous event where a couple were publicly executed in front of a pagoda — killings the men remembered. He then asked them if they could recall arresting a teenage boy for stealing mushrooms.

"Oh, we know, that was us! We were there," Chhang recalls them saying. "We were excited because we were hiding behind a bamboo bush and we knew he was coming and then when he got them we blocked his exit and we got him."

"I thought: 'Should I beat this guy up now? Should I smash him?' The evil side of me was talking," Chhang says. "Then I calmed down and said: 'You know that boy was me?' They were silent, nobody talked."

One of them then started offering Chhang coconuts and chicken soup, something he understood as an apology in Khmer culture.

"When you have a guy who is 75 years old and he bows to you and brings you a coconut drink, in our culture that is an apology," he says. "But why didn't I accept this? I told myself I had grown out of this culture. I want more, I want them to say I'm sorry. But then I thought: how can they say this? They don't even remember me," he adds.

Chhang cites this as an example of the complex nature of reconciliation.

"Sometimes reconciliation means you have to confront it, but it doesn't mean you need to be reconnected," he says. "That's how I deal with the Khmer Rouge." An elderly Cambodian looks at portrait photos of victims of the Khmer Rouge at the Tuol Sleng genocide museum in Phnom Penh in this file photo. (Photo by Tang Chhin Sothy/AFP)

Since its inception, DC-Cam has brought countless former Khmer Rouge and victims of the regime together for dialogue, undertaken a national genocide education program and compiled by far the largest archive on the period.

Many documents have been used as evidence in the U.N.-backed trials of the regime's former leaders. Along with his recent Ramon Magsaysay Award recognition, Chhang was named in the Time 100 most influential people in the world in 2007.

But despite his accolades, Chhang, who lives in Phnom Penh with his 92-year-old mother, says his past will never leave him.

"When I think of my childhood, despite trying to help young people and all these things, it just doesn't compensate because it's not me, it's somebody else. You're already broken," he says.

"There's no way to fix or repair. I discovered that loss of childhood is a lesson from the past that I can share with young people today."