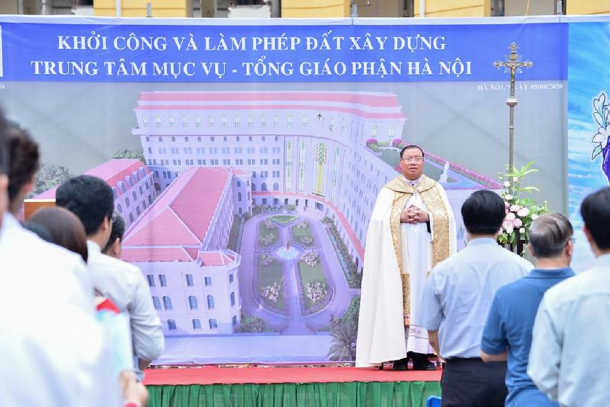 Archbishop Joseph Vu Van Thien presides over the groundbreaking ceremony for the new pastoral center on Aug. 5 in Hanoi. (Photo courtesy of tonggiaophanhanoi.org)

Hanoi Archdiocese has begun the construction of a huge pastoral center to serve the faith life and evangelization work of Catholics in the Vietnamese capital.

Archbishop Joseph Vu Van Thien of Hanoi presided at a special groundbreaking ceremony for the new center in the compound of the Hanoi archbishop’s house on Aug. 5.

The new building aims at not only meeting the religious needs of the local Church but to also show the Church’s intentions in the future, Archbishop Thien said.

“This building will be a spiritual symbol of the home of God and the local Church,” he said.

“We should also pay attention to developing the archdiocese’s spiritual life, fostering community solidarity, love and charity among God’s people, and bring Christian values to other people.”

The 60-year-old archbishop said the new building will be based on three solid principles: the local Church’s trust in divine providence, local Catholics’ love and improving their faith life.

“We pray for the archdiocese to become a family of charity, love and unity to bear witness to the Good News,” said the archbishop, who assumed control of the archdiocese in late 2018.

Father Joseph Nguyen Van Tuan, head of the archdiocese’s design committee, said the new pastoral center was designed to reflect the peaceful atmosphere of monasteries and has an environmentally friendly design featuring a garden and fountain.

A statue of St. Joseph, the archdiocese’s patron, will be placed in the garden.

The building will have eight stories and two underground levels, with a total area of 19,000 square meters. It will host conferences, studies, training, retreats, special gatherings and other pastoral activities.

It will also provide accommodation for 300 people, have a 400-seat chapel and a 400-square-meter garden on the roof.

The project, with an estimated cost of 200 billion dong (US$8.7 million), is expected to be completed in two years.

Mary Tran Thi Huong, an anti-abortion activist, said the pastoral center is good news for local Catholics who have endured a lack of facilities for decades.

Huong, 77, said the archbishop’s house is too small for church activities. Children have to study catechism in the yard, while associations and groups have no room to meet.

She said government authorities confiscated many church-owned facilities in Hanoi after 1954 when communist forces took control of northern Vietnam.

“We are eagerly awaiting this new pastoral center and pray it is finished soon to meet our urgent needs,” Huong told UCA News.

Hanoi Archdiocese, established in 1679, serves 320,000 Catholics in the Vietnamese capital and four neighboring provinces. It has 178 priests offering pastoral care to 161 parishes.