Negotiating with Beijing is more effective than public grandstanding 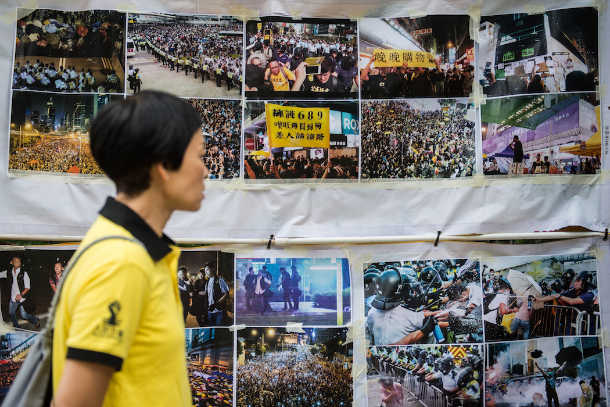 A file image of an activist walking past a display of photographs on a banner showing events during the pro-democracy protests of 2014, outside the government headquarters in Hong Kong on Sept. 28, 2016, on the then second anniversary of the Umbrella Movement protests. (Photo by Anthony Wallace/AFP)

The latest guilty verdicts in Hong Kong against the leaders of the 2014 Umbrella Movement protests for causing public nuisance has, once again, focused global attention on the status of the former colonial city and its turbulent relations with Beijing and whether it will be able to maintain the rights under the Basic Law that is the city’s equivalent to a constitution.

With these verdicts, it seems that the protesters' call for more democracy has failed for the moment. The question now is where does the city go from here. Naturally, there may be more protests in the future as the city becomes ever more closely integrated with China, but it is questionable whether this is ultimately the most productive route to take to safeguard its long-term future.

In the west, campaigns and protests have become the normal methods to demand change or raise awareness of a particular issue. Beijing, however, has a different perspective, not only because of the inherent differences in their governmental system but also due to the experiences of the past and current generation of Chinese leaders.

Although for young Hong Kongers, the Cultural Revolution that ran from 1966 to 1976 is an event that is either consigned to history textbooks or the memories of their grandparents, for the current generation of Chinese leaders, it is still a current event.

The Cultural Revolution involved the unleashing of a mass youth movement in support of Mao Zedong and the revolution. Fanatical youths were encouraged to join the Red Guards and get rid of the Four Olds — Old Customs, Old Habits, Old Cultures and Old Ideas. Apart from causing the damage and destruction of countless priceless artifacts and centuries-old cultural monuments, the movement also resulted in the closure of educational institutions, families that renounced each other, and a lost generation.

Caught up among this chaos were some of the current generation of Chinese leaders. President Xi Jinping’s father was imprisoned, his mother was forced to publicly renounce her husband, and the young Xi Jinping was exiled to a life of hard labor in the countryside.

Equally, Deng Xiaoping, the architect of the reforms in the 1980s that allowed China to open up and develop, was also purged during this period and Red Guards threw his eldest son, Deng Pufang, from a three-story building. Deng Pufang remains a paraplegic to this day.

Given their personal histories with out-of-control youth movements, it is hardly surprising that the current generation of Chinese leaders do not see their modern incarnations in a positive light, no matter how well intentioned. For them, they do not see movements calling for increased democratization, but the return of latter-day Red Guards and national chaos.

History also informs this generation of Chinese leaders with regard to their attitude to foreign opinions on the affair in Hong Kong and on other Chinese issues.

There are still considerable hang-ups over the Century of Humiliation, the period between the mid-19th and early 20th centuries that saw the precipitous decline of Chinese power in the face of European imperialism. The period saw the concession of several Chinese port cities to European rule, including Hong Kong.

Throughout this period, Christianity was also frequently used as a justification for imperial intervention in China, as well as elsewhere. It took almost a century for China to physically recover from this period; needing to pass two revolutions, world wars, a civil war, and the chaos of revolutionary China to do so. Arguably, though, the Chinese psyche is yet to recover.

Returning to the present day, China remains wary of foreign interference in the nation’s internal affairs, especially in activities that can be seen as encouraging separatism. Western pontification on human rights and democracy sound suspiciously akin to the trumpeting of Christianity as the one true and universal religion during colonial times. It should not be surprising that successive Chinese leaders have viewed the new universal values with some skepticism, given how Christianity has fallen out of favor in the West.

Thus, appeals to foreign powers for assistance in safeguarding the rights of Hong Kong are likely to be viewed negatively by Beijing. More importantly, the strategy is unlikely to work in the long run. While Britain is the obvious place for recourse, given the nation’s history with the city, Britain has displayed little willingness and capacity to intervene by anything more than impotent hand wringing. Furthermore, Britain’s current obsession with Brexit means this situation is likely to continue into the foreseeable future.

What then is the way forward for Hong Kong? In the long term, like it or not, the city will become ever more closely aligned with mainland China. According to the Sino-British Joint Declaration, the status quo in Hong Kong is to last up to 2047. In the meantime, Hong Kongers should grab hold of what concessions they can acquire from Beijing and work on a more subtle negotiation strategy.

Ironically, without the protest, Beijing would have already conceded a form of universal suffrage in the selection of the city’s chief executive. While the arrangement would not have been ideal, it would have been considerably more than what Hong Kongers enjoyed previously, even under British rule when the city’s rulers were appointed by London without any local input. The orderly transition of power through this new mechanism would have been a viable platform to negotiate further concessions. As it is, the protests achieved nothing but the hardening of Beijing’s position and the creation of social division.

If Hong Kong is to get out of the mess that the protesters have landed the entire city in, a new set of leaders will have to learn to stand on their own two feet without invoking foreign involvement at every turn. They must also focus more on negotiation and diplomacy rather than public grandstanding, bearing in mind Beijing’s mindset and perspectives. By understanding how Beijing thinks and their concerns, it may be possible to see better as to what can and cannot be done.

Before that though, the first rule of successful negotiation, whether in the East or the West, is to talk with the other side — not to shout at them from the streets.

* Will Summers is an alias used by the author who is a former diplomat and a long-time observer of Thai and international politics.