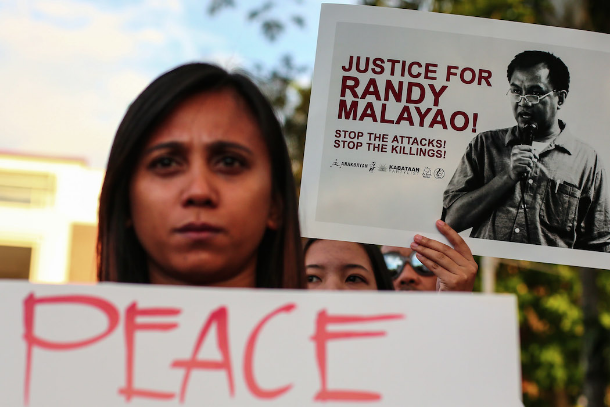 Church groups and human rights activists hold a demonstration in Manila on Jan. 30 to call for justice for the killing of rebel peace consultant  Randy Malayao. (Photo by Jire Carreon)

A communist rebel peace consultant was shot dead in the Philippines on Jan.30, sparking an outcry among rights and peace activists.

Gunmen shot Randy Felix Malayao, 49, a consultant for the National Democratic Front of the Philippines (NDFP), in the head while he was sleeping on a bus in Nueva Vizcaya province.

The NDFP is a coalition of groups involved in an ongoing communist insurgency in various parts of the country. It has long been engaged in peace negotiations with the Philippine government.

Malayao joined the NDFP as a consultant in negotiations with the government before President Rodrigo Duterte put them on hold in November 2017. His death came two days after Duterte backtracked on resuming the talks.

"His death is a great loss to a nation seriously searching and striving for peace based on justice," read a statement from the Promotion of Church People's Response.

The church group said Malayao's death "will not quell people's desire for a just and lasting peace."

"The cold-blooded murder of Malayao is yet another addition to the growing list of political activists who have been attacked and killed in the country," read a statement from Amnesty International.

"Such attacks are yet another example of how public safety and security in the Philippines are being eroded," he added. The rights group urged Philippine authorities to "fully investigate" Malayao’s murder and the killing of other activists since Duterte came to power in 2016.

In a statement, the NDFP praised Malayao "for his invaluable contributions to the revolutionary movement and peace efforts."

"He was an indefatigable worker in the service of the people and was ever ready to present the side of the NDFP in consultations on the peace talks," said Fidel Agcaoili, head of the rebel peace panel.

Aside from being a peace activist, Malayao was vice president and regional coordinator of the Bayan Muna political party in the northern region of Cagayan Valley.

He was also a columnist for the Baguio City-based Northern Dispatch newspaper.

Father Dionito Cabillas of the Philippine Independent Church said Malayao was a "natural in alliance work."

He said that when Malayao was arrested in 2008, "he was able to gain the trust of his fellow prisoners and his jailers."

"To be recognized by these people showed an art of being an organizer and a good leader of people," said Father Cabillas.