Nigerian soldiers and police officers stand at the entrance of the Federal College of Forestry Mechanisation in Mando, Kaduna state, on March 12, 2021, after a kidnap gang stormed the school shooting indiscriminately before taking at least 30 students around 9:30pm (2030 GMT) on March 11, 2021. (Photo: BOSAN YAKUSAK / AFP)

Unidentified gunmen have kidnapped another Catholic priest in Nigeria in a suspected extortion effort amid reports of increased terrorist activities in the African nation.

Father Harrison Egwuenu, dean of St. George's college in Obinomba, was abducted on March 15 at around 8 p.m. local time in Abraka, in Delta State, in the south of Nigeria.

The attackers stopped his car and fired in the air to threaten the passers-by and took away the priest from his car to an unknown destination.

The priest was coming to St. George’s College in Obinomba to take his new assignment duty as principal.

Father Benedict Okutegbe, the administrator of the Cathedral of the Sacred Heart in the diocese of Warri, confirmed the kidnapping and sought his rapid release on March 18.

He said police have launched a manhunt for the abductors.

Kidnapping for extortion is frequent in Nigeria. The victims include several priests, men, and women religious. But the Bishops' Conference of Nigeria has decided to not pay ransom several years ago.

The bishops have warned the government that its inability to provide security for all will force Nigeria to face the "risk of being torn to pieces."

“Nigerians are experiencing an invasion of their farmlands by armed Fulani herdsmen; a group well organized and already designated as the fourth deadliest terrorist group in the world by the Global Terrorism Index.”

The West African country has is in turmoil since 2009 after the Islamist group Boko Haram launched an insurgency. The jihadist group targets religious and political institutions and civilians. 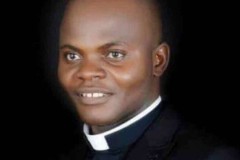 Besides, there are clashes between Muslim Fulani herdsmen and Christian farmers over grazing land.

Last December, Bishop Moses Chikwe, auxiliary bishop of the Archdiocese of Owerri, was abducted by unidentified gunmen. He was released unhurt.

In November, Father Matthew Dajo was kidnapped by unknown gunmen and he was freed 10 days later.

Father Okutegbe said these kidnapping incidents have "nothing to do with religion. One can say it is simply a reflection of the collapse of the security apparatus of the state and country. No one seems to be safe anymore.”