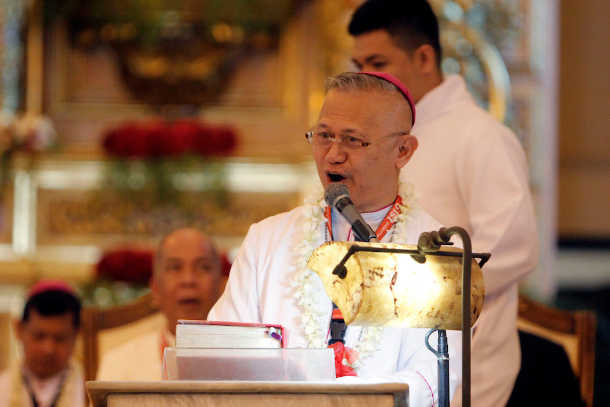 Archbishop Jose Palma of Cebu had not been threatened before the incident at his residence. (Photo by Joe Torres/ucanews.com)

A gunman was shot and killed inside the compound of the archbishop's residence in the central Philippine province of Cebu on July 10.

Authorities identified the gunman as Jeffrey Mendoza Canedo from a driver's license found in his possession after the shooting.

Remegio Debuayan, who was guarding the residence, said Canedo, who was on a motorcycle, was wearing a helmet over a balaclava when he entered the compound.

It was reported he was looking for Archbishop Jose Palma of Cebu and had asked several people if he could talk to him.

Policemen called to the scene ordered Canedo to raise his arms but the man drew a firearm, prompting the police to shoot.

Authorities said nobody from the archbishop's residence was hurt. Archbishop Palma was in Manila during the incident.

Cebu Archdiocese later said in a statement that "there was no prior threat" to Archbishop Palma. It added that an official police report would disclose details of the incident pending an investigation.

The incident occurred a day after a meeting between President Rodrigo Duterte and Archbishop Romulo Valles of Davao, president of the Catholic bishops' conference.