Workers at Coca-Cola and Anchor beer, besides unions in Malaysia, are backing the protests at NagaWorld 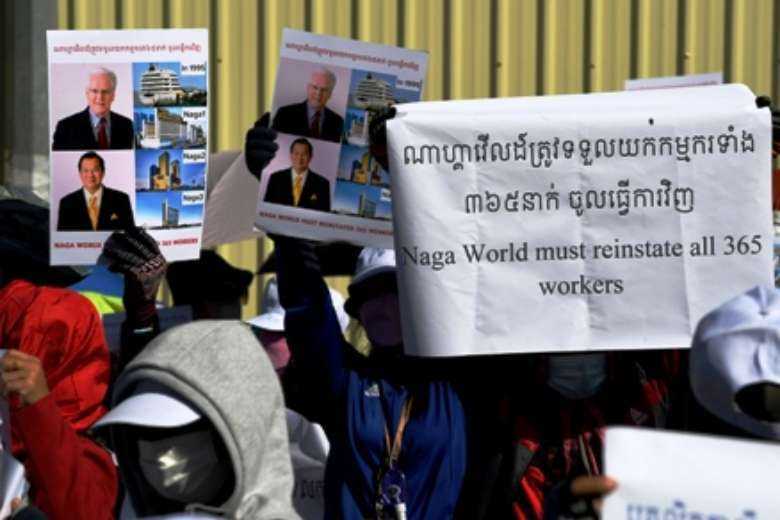 Workers from the NagaWorld casino demand the reinstatement of colleagues who were laid off in 2021 during a protest outside the National Assembly building in Phnom Penh, Cambodia, on Jan. 4. (Photo: AFP)

Trade unionists said the plight of casino workers and the arrests of at least nine union leaders had resonated at factories producing Anchor beer, Coca-Cola and at Caltex petrol stations around the country.

Yoeun Reth, union president for Phnom Penh Chevron workers, told Voice of Democracy (VoD) that members at 27 Caltex petrol stations in the capital had joined a social media campaign calling for the release of the jailed NagaWorld unionists.

“This is a social disease and it spreads into our system and needs to be treated,” Yoeun Reth said, adding that the issues confronting NagaWorld were shared elsewhere.

About 2,000 striking workers have persistently protested outside the NagaWorld casino demanding the reinstatement of 365 union leaders and delegates who were laid off in April 2021 in what the company said was a necessary cost-cutting measure due to the pandemic.

Most are from the Labor Rights Supported Union of Khmer Employees of NagaWorld (LRSU) and were among about 1,300 mass layoffs at NagaWorld, owned by the Malaysian billionaire Chen Lip Keong.

We support their struggle and we stand for them and act. This is the workers’ right and a human right

Protesters are also demanding fair compensation packages for staff prepared to leave. However, the courts have deemed the industrial action illegal while police have alleged the unions are being funded by foreign and local NGOs.

In Malaysia, Labor Law Reform Coalition co-chair Gopal Kishanam said unionists had submitted a letter of support for NagaWorld workers at the Cambodian embassy which officials had refused to accept.

“We support their struggle and we stand for them and act. This is the workers’ right and a human right,” he said.

His sentiments were echoed by Ke Chanrithy, union president at Cambodia Beverage Company, which produces and distributes Coca-Cola, after meeting NagaWorld members.

“We asked them to join their campaign after we introduced ourselves. So that protest allowed us to join. We plan to go there again after we have a meeting with local unions,” he said.

Ke Chanrithy said some of his members had joined the rallies over the weekend and were also offering online support for striking NagaWorld workers.

Khem Mao, a union leader at the Angkor Beer factory in Sihanoukville, said a small number of his 160 members had also supported strikers online.

“It’s sad. Look at the NagaWorld Company, with two skyscrapers on land by the water. But they are hurting their own children,” he told VoD. “I cannot find a word to describe this feeling.”

Phnom Penh Municipal Court ordered the detention of the nine LRSU members, one of whom was released on bail. They are facing incitement charges for conducting an illegal demonstration.

The US embassy in Cambodia has said it was troubled by police action against workers “for their peaceful expression and urge authorities to hear citizens, not silence them. Freedoms of speech, assembly and association are guaranteed in the Cambodian constitution."