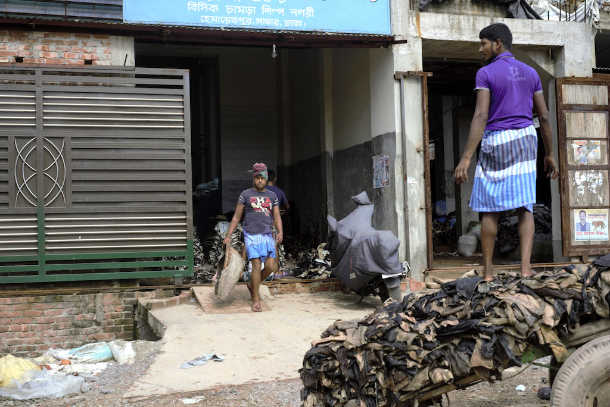 Tannery workers on duty in unhealthy conditions in Savar, a suburb of capital Dhaka, on July 10. The Global Slavery Index 2018 says 592,000 Bangladeshis are modern-day slaves. (Photo by Stephan Uttom/ucanews.com)

Bangladesh was ranked 92nd among 167 nations and 19th among 28 countries in the Asia-Pacific region, according to the Global Slavery Index 2018 by the Australia-based Walk Free Foundation published on July 19.

"From my years of experience with the labor sector, I can affirm the number should be much higher. There are about 50 million people in the industrial labor sector including four million garment workers, and they face slave-like conditions including poor labor practices, low wages and hazardous working conditions," Akhter told ucanews.com.

Negligence, corruption (bribery), lack of accountability and insufficient government manpower for oversight are blamed for the slave-like treatment of workers in various industries and households, he said.

Ataul Gazi and his wife are both garment workers in Dhaka. Gazi, 34, says his low wage and poor working conditions could be called slavery.

"I have been in the industry for 12 years now and earn about 14,000 taka (US$165) and my wife earns 8,000 taka per month. We work long shifts, days and nights, but at the end of the month we cannot save anything after paying family expenses and tuition fees for two children," Gazi told ucanews.com.

Withholding of pay, longer shifts of up to 12-14 hours and abusive treatment from management are very common in the factory, he added.

Holy Cross Father Liton Hubert Gomes, convener of the Justice and Peace Commission in Dhaka Archdiocese, says people in slave-like conditions are a reality in Bangladesh.

"Many in Bangladesh don't have enough opportunity to fulfil their basic human needs. People are forced to take up backbreaking jobs for low pay because they must get money to buy food. There is a serious lack of monitoring by the government. The tragic reality is that often owners are financially and politically influential, and it forces the government to be biased in their favor and remain silent," Father Gomes told ucanews.com.

Shibnath Roy, director general of the state-run Labor Department, was reluctant to accept the findings.

"We have state mechanisms like the Wage Board and inspection teams to ensure fair working conditions. We can admit our limitations and acknowledge that many workers don't get a living wage, but terming the conditions as slavery is incorrect. We are working hard and hope to fix the problems one day," Roy told ucanews.com.

The index reports that 40 million people are enslaved worldwide and India is home to the largest number of slaves — eight million.

China, Pakistan, North Korea and Nigeria are in the top five countries accounting for 60 percent of victims of modern slavery globally, it reported.