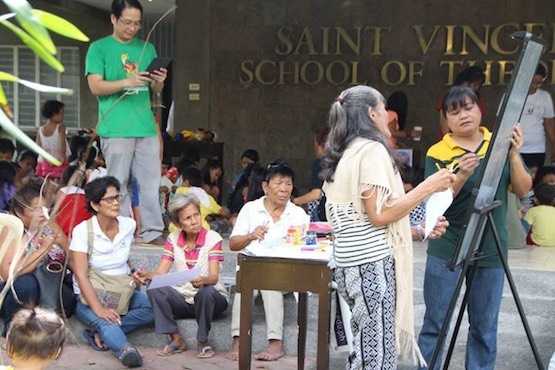 Remedios de Juan was a doting grandmother enjoying her twilight years when policemen barged into the house of her son, Constantino, killing him in front of his 12-year-old daughter, Christine.

Overnight, on Dec. 6, 2016, the 86-year-old Remedios was forced to become the family's breadwinner. Her daughter-in-law, who was then in jail, has just given birth to Remedios' seventh grandchild.

Every day, Remedios forces her ailing body to finish one task after another. Every morning dawns with a prayer for deliverance and survival.

Like other members of left-behind families in the Philippines' "total war against drugs," Remedios finds little time to grieve, much less to express the feelings bottled up inside her.

Then came an offer by a church group to free Remedios' spirit, giving her the opportunity to bond with other survivors of what has become the government's "war against the poor."

As President Rodrigo Duterte’s deadly campaign against narcotics breaks up families and leaves thousands of children orphaned, women in urban poor communities are stepping beyond caregiving roles, to become organizers and campaigners for justice.

Father Daniel Pilario of the Congregation of the Mission in the Philippines said art has helped families of victims of drug-related killings improve their skills at expressing themselves and has boosted self-confidence.

On March 3, Remedios and several other women and children left behind by parents who were among about 12,000 victims of so-called extrajudicial killings tried to learn to paint and fashion colorful paper mache under the tutelage of famous Filipino artists.

Most tried their hand at happy, idyllic scenes, but the heavy black undertones of their art works indicate a lingering pain and anger.

Father Pilario, who is dean of the Saint Vincent's School of Theology in Manila, said the "art therapy" sessions "bring out negative feelings inside mothers, widows, siblings and children of victims."

The photography and storytelling workshops don't negate feelings, said the priest. "It allows re-channeling to more positive expressions," he said, adding that, "the ability to express emotions is crucial to healing."

"Art washes away from the soul the dust of everyday life," said the priest quoting the great Spanish master Pablo Picasso.

Equally important is finding the means to share one’s story with the world, he said.

"Duterte tries so much to deny the existence of these victims, but they are very much alive, and trying their best to survive through non-violent ways, this time with art," said Father Pilario. Normita Lopez (right), who writes poetry about her slain son on her mobile phone, joins a protest march in Manila on March 6. (Photo by Inday Espina Varona)

Since then, she has been writing poems for her son, Djastin, on her mobile phone. She has completed half a dozen other works, all written on the fly between tasks.

"I don’t usually have a pen and paper with me, so I write on my cellphone," said Normita, who writes her poems in Tagalog or Filipino, the country's official language.

Her first work traces the short life of her son, from the time he was in her womb, his first smile, his first step, his first joke.

"I wanted to put down these memories, celebrate his milestones, because there will never be another one. They stole his future," said Normita.

The first poem she wrote ended with a description of Djastin’s death: "In one blink, they took my son’s life, the son I love and will never embrace again."

"I will never see his smile again, will never hear his jokes, and the laughter that filled our house."

Normita's poetry ranges beyond what is personal.

One poem talks of the collective fight of people who labor daily but are drowned in debt because of those who steal their lands, jobs, and opportunities.

Another speaks of a community with no health facility, a symbol, Normita said, of government neglect.

"It was listening to other people’s pain that taught me to free mine," she said. "Now, I also write about their pain and problems."

Aside from writing about the victims, the poor, and the oppressed, the new poet proudly claimed that she now also joins protest marches. "I now march for them," she said, referring to her subjects.