Despite large volumes of waste, Greenpeace says bay could be cleaned The Greenpeace ship Esperanza docked in Manila Bay on Tuesday, the last stop on a nationwide tour aimed at raising awareness of pollution in the archipelago nation following disturbing recent scientific research indicating high levels of waste poured into the sea.

The ex-Russian navy firefighting ship turned activist vessel arrived amid calls for a clean-up in Manila Bay after University of the Philippines (UP) research found the presence of heavy metals, pesticides and high levels of fecal coliform which often comes from feces.

“When you think of Manila Bay, contrasting images come to mind. First, of a coastline littered with trash, and second, of a beautiful sunset,” said Dr Laura David of the UP Marine Science Institute.

Excess waste disposal in the bay results in $93 million in damages every year mostly due to losses to fisheries, exports and mortality costs due to waterborne diseases, research showed.

The Esperanza is in the Philippines for the Greenpeace ‘Ocean Defender Tour of Southeast Asia’ which also included stops in Dumaguete, a seaport in southern central Negros Oriental, and Bicol in the northeast following a trip to raise awareness of sea pollution in Thailand last month. 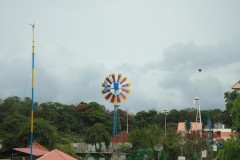