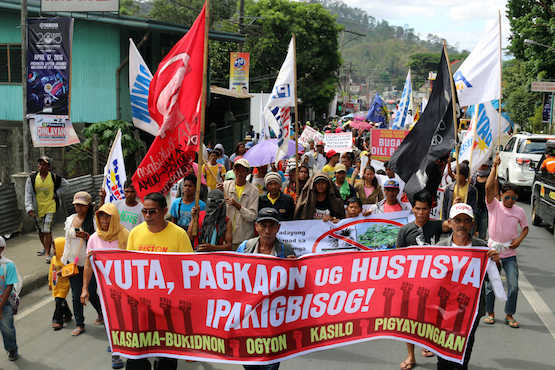 Farmers in the southern Philippine province of Bukidnon hold a protest march on April 22 to call for government subsidy for families affected by the dry spell. (Photo courtesy of the Rural Missionaries of the Philippines.)

"The drought has worsened the poverty and hunger of farmers," said Pedro Arnardo, a peasant leader from the southern region of Mindanao.

"We don't have land to call our own, and seeds and water that the government is supposed to provide are lacking," said Arnardo who joined a protest march in Manila.

In the southern city of Koronadal, anti-riot policemen clashed with at least 3,000 protesting farmers who tried to enter the regional compound of the Department of Agriculture.

The farmers were demanding food rations to mitigate heavy crop losses due to the drought, said Sister Hedelita Bagatua of the Religious of the Virgin Mary.

The nun told ucanews.com that police tried to disperse the protesting farmers resulting in a brief clash.

In Cagayan de Oro City, at least 2,000 farmers also staged a protest march to pressure the government to release funds for farmers affected by the El Nino phenomenon.

In the city of Malaybalay, Bukidnon province, some 5,000 farmers were able to convince the provincial government to distribute one sack of rice to every family affected by drought.

"We reiterate our calls for farmers across the country to intensify protests against hunger," said Rafael Mariano of the Peasants Movement of the Philippines.

"We are one with peasants from across Mindanao who are marching in the streets to demand food and climate justice," said Sister Maria Fatima Somogod of the Rural Missionaries of the Philippines. Protesters call for the closure of coal power plants in the country during a protest rally in Manila on April 22. (Photo by Rene Sandajan)

Clemente Bautista, coordinator of the Kalikasan People's Network for the Environment, said deforestation and land degradation are major environmental issues that are confronting agricultural countries in Southeast Asia.

Bautista blamed the conversion of forests into agricultural land, urbanization, commercial logging, and forest fires as the major reasons for the degradation of natural resources in the region.

He said, however, that governments should also be held responsible for the drought caused by El Nino.

The state weather bureau predicted in 2014 that El Nino will cause intense drought," yet the government failed to prepare adequately to mitigate the effects," said Bautista.

"The people have thus been affected both by the extreme climate impacts and the long-standing conversion of vast tracts of forests into agricultural plantations, mining areas and logging concessions," he added.

This year, the National Disaster Risk Reduction and Management Council has declared emergencies in six provinces, 12 cities and 17 towns due to drought.

"There is not enough relief given to drought-affected areas and families," said Bautista.

The government announced that it has already released more than US$26 million worth of assistance, but Bautista said no food assistance has been given to affected areas.

Environmental activists also accused the government of being "hypocritical" over its climate change policies.

While the Philippines says it will reduce carbon emissions by 70 percent by 2030, it still allows the proliferation of coal power plants.

By 2020, more than a third of the country's power will come from coal power plants, said Zeph Repollo, a climate activist of the 350.org Pilipinas movement.

The government has recently approved the construction of 47 coal power projects.