With 60-million-strong Hubei province under quarantine, other Chinese regions including Beijing are restricting access 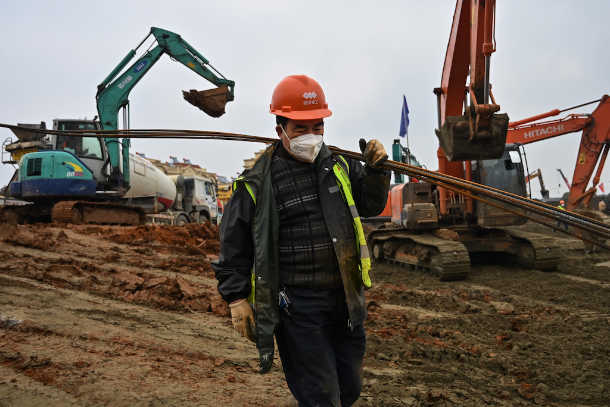 A worker is seen at the construction site of a new hospital being built to treat patients from a deadly virus outbreak in Wuhan in China's Hubei province on Jan. 27. China is rushing to build a new hospital in a staggering 10 days. (Photo: AFP)

As the spread of the Chinese respiratory coronavirus (2019-nCoV) continues to accelerate, a global pandemic and ensuing massive humanitarian tragedy are threatening the country and surrounding territories.

The virus has spread to almost every province in mainland China, while Hong Kong, Taiwan and Thailand are the worst affected outside the mainland, whose Spring Festival holiday has been extended by three days to March 2 to delay travel by up to 500 million people.

China's President Xi Jinping held a politburo meeting on Jan. 25 to discuss steps to contain the epidemic, saying on state television that the outbreak is accelerating and that the country is facing a "grave situation," Voice of America reported.

At the time of writing, 81 deaths had been confirmed with 2,827 more infected and over 30,000 people in China alone under watch; the number has jumped each day over the past 10 days and is expected to continue the same trajectory. At least 44 cases have been confirmed offshore including in Thailand, Singapore, the United States and Australia as Chinese Premier Li Keqiang travelled to Wuhan to visit hospitals.

A growing number of medical research units crunching statistic and infection rates have estimated that the number of infected people is dramatically higher.

Researchers at London’s Imperial College led by Professor Neil Ferguson estimated there were already 100,000 affected by the virus.

"It is unclear at the current time whether this outbreak can be contained within China," they wrote, emphasizing that key questions remain, such as how well residents adopt recommended risk-reduction steps, how severe the disease is, and how readily people with mild disease can pass the virus to others.

The dean of Hong Kong University’s medical school estimated that as of Jan. 25 about 44,000 people in Wuhan alone were likely to have been infected by the new virus, with 25,000 of these already sick but others in the incubation stage and not yet showing symptoms. Experts said that, contrary to previous advice, people not showing symptoms of the disease could pass it on, according to a report in rthk.hk.

The disease is not expected to peak until April or May, after which it could subside gradually.

In a worrying development, state-run Global Times reported that Zhou Xianwang, the mayor of Wuhan, where the disease is first thought to have jumped from animals to people in a central market that sold wild animals, told a Jan. 26 press conference that as many as 5 million people have left the city to be with family for the Spring Festival holiday.

Drastic measures continue to be taken by Chinese authorities — and in neighboring territories —  with about 60 million people now inside the quarantine zone as the whole of Hubei was sealed off; all transport in and out of the province has been suspended and roads cut off by authorities.

The municipality of Beijing and coastal province of Shandong, as well as the city of Shantou in Guangdong province, were among areas that were blocking long-distance buses, with more travel restrictions across China expected to come.

Shanghai authorities have told people to stay away from work until Feb. 10 in an effort to identify any people who have been infected outside the workplace.

In Taiwan, the government was preparing to send back more than 6,000 mainland tourists by the end of the week.

“It has to be pointed out that it is very regrettable that the city failed to take necessary emergency measures to prevent that many people from traveling across the country as this makes it especially difficult for the country to prevent and control the epidemic,” the Global Times reported, amid rumors that senior city and provincial officials have been forced to step aside by Beijing. “The city should face the fact that the public is strongly dissatisfied with this.”

The epidemic has disrupted civic and religious celebrations as Chinese New Year events were cancelled. Masses were cancelled in Wuhan and other Hubei cities as well as in Shanghai.

Meanwhile, in Singapore, Catholics were asked not to attend Mass if they were showing any signs of being ill. The Chancery of the Archdiocese issued a letter saying communion from the chalice was suspended and the Eucharist was only to be distributed on the hand, not the tongue.

"It is not a sin to miss Mass on Sundays or holy days of obligation if one is sick," read a post on Facebook group Catholic Life Singapore uploaded on Jan 24.