But out of touch, power conscious Philippine bishops could be on a collision course with new president, they say 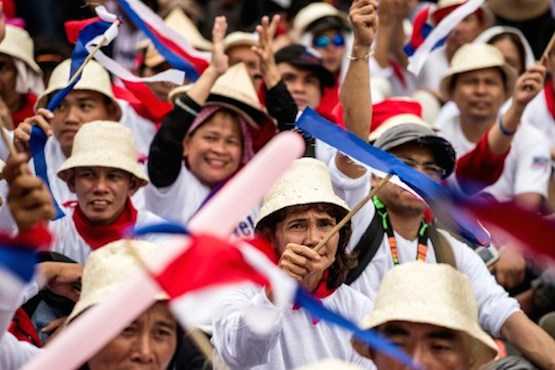 Activists wave flags to show their support for Philippine President Rodrigo Duterte in Manila on June 30, 2016. Authoritarian firebrand Rodrigo Duterte was sworn in as the Philippines' president on June 30, after promising a ruthless and deeply controversial war on crime would be the main focus of his six-year term. (Photo by AFP)

The country’s powerful bishops and Duterte have been exchanging barbs since last month’s presidential election.

Bishops warned about the "politics of death," a reference to Duterte’s pro-death penalty stance. The new leader punched back, raising charges of corruption and reports of sexual abuse by the clergy.

Father Dulay said there are some areas where the church as a whole will stand firm.

"The church will always be pro-life, so it will never agree to the death penalty and many aspects of implementing the country’s new Reproductive Rights Law," the priest said.

Human rights is also a potential area of conflict, he added.

But at the grassroots level, priests, nuns, and the laity have a better grasp of points of unity and divergence with Duterte.

'Passion for the marginalized'

In the southern region of Mindanao, the Rural Missionaries of the Philippines released a report on the state of the island’s indigenous peoples on the eve of Duterte's inauguration.

Ailine Villarosa, advocacy officer of the missionaries, said the group sees the new president's "genuine passion for the marginalized sectors."

Villarosa said her group hopes to present to Duterte 30 cases of extrajudicial killings in the northern part of Mindanao, host to some of the world’s richest mineral reserves in some of the country's poorest communities.

The victims were all leaders of tribal communities opposed to the entry of large-scale mining, logging concessions, and the expansion of plantations in ancestral lands.

There are many areas where church people can work with Duterte, said Villarosa, citing environmental issues and the rights of peasants and indigenous peoples to land.

She said that in the provinces, church people are risking their lives for causes that Duterte has made priorities of his administration.

Duterte is the first president from Mindanao, a lush but troubled island often seen as a laboratory of war for communist and Muslim rebel groups, the government and the United States military. A Catholic priest leads the prayer for a slain tribal leader in the southern Philippine region of Mindanao. (ucanews.com photo by Vincent Go)

Sacred Heart Father Benjamin Alforque, a  theologian, who has worked in Mindanao's conflict zones, said the complexities and contradictions of Duterte could usher in a new era of "prophetic vigilance" in the Philippines.

The vigilance should not only focus on Duterte’s autocratic tendencies, the priest said. It should also scrutinize the church hierarchy’s role in propping up unjust structures that have widened the economic gap between a few elite clans and millions of struggling citizens.

"It is a good time for inter-cultural dialogue," said Father Alforque. "It is clear that this leader understands that poverty isn’t solved by dole-outs but by rooting out economic and political inequities," he said.

While Duterte should not be exempt from criticism, Father Dulay said the church hierarchy’s approach is part of the problem.

Since the struggle against the Marcos dictatorship in the Seventies and the Eighties, the Philippine Church has become used to being a power player.

The late Corazon Aquino, swept to power by the 1986 People Power revolution, was a devout Catholic. The role of late Cardinal Jaime Sin of Manila in mobilizing the peaceful revolt gave the church a preeminent role in the immediate post-dictatorship era.

Another female president, Gloria Arroyo, wooed bishops to foil ouster attempts, giving out luxury sports vehicles and other perks. Her successor and Corazon Aquino’s son was indifferent toward the church.

Now the church is faced with a critic who knows just which buttons to push.

"I hate to say it, but there is a lot of corruption in the church," said Father Dulay. "Corruption isn’t just stealing. It can mean looking the other way in return for favors," he said.

In the face of Benigno Aquino’s indifference, bishops could have devoted more time to the common people. But even on the issue of human rights, which they now raise against Duterte, Catholic bishops have a spotty record, said Father Dulay.

"The church hierarchy has not been consistent on human rights," said the priest, who spent decades of pastoral experience in Latin America. "If the victim is an important figure, [the bishops] rush to the defense. When the poor get hit, they turn away," he said.

Father Dulay cited the plight of some 10,000 tribal people who were driven off their lands by soldiers and paramilitary forces in the pay of miners and plantation concessionaires.

"The church’s actions have been largely symbolic," the priest said. "There has been no commitment by the hierarchy to resolve tribal communities' woes. Most aid came from priests and nuns immersed among the indigenous communities." 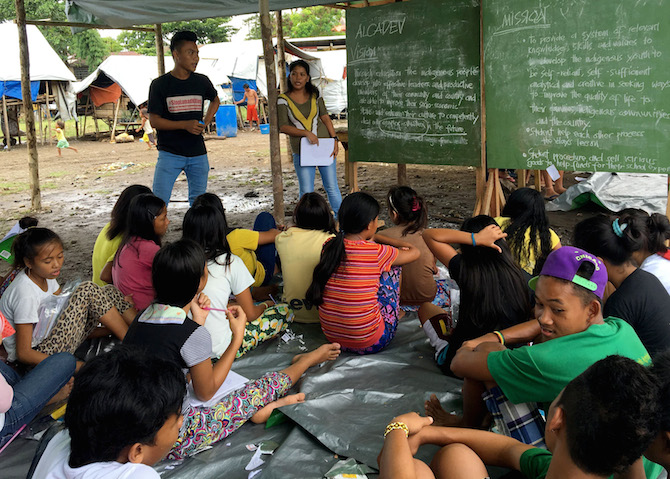 Tribal children, who call the country's new president "Tatay Digong" (Daddy Digong), continue to attend classes in a makeshift school in an evacuation site where they have stayed for the past nine months. Religious and activist groups have been supporting the displaced tribal people in Mindanao. (ucanews.com photo by Inday Espina Varona)

Many grassroots church workers back peace talks between the government and the communist-led National Democratic Front of the Philippines and a separate track with the Moro Islamic Liberation Front in Mindanao.

More than a dozen interfaith groups also back a call for the release of political prisoners.

But Father Alforque told ucanews.com that an influential Catholic bishop refused a request for a statement of support.

"He dismissed it, saying he did not trust the Left," said Father Alforque.

Fathers Dulay and Alforque, however, believe that the church at the grassroots level see many openings for genuine change under the presidency of Duterte.

Both priests advised fellow church workers to be discerning and speak up when there are wrongs that need righting.

"President Duterte will need expressions of support to push his reforms because power forces, even now, are trying to stop him," said Father Alforque.

"To the progressive church, there is the excitement of a new vision for a united Philippines," he said.

"To church workers from the margins who regularly face threats, you cannot imagine the relief that comes with the ability to come together and discuss and debate issues with no fear of arrest or torture," Alforque said.