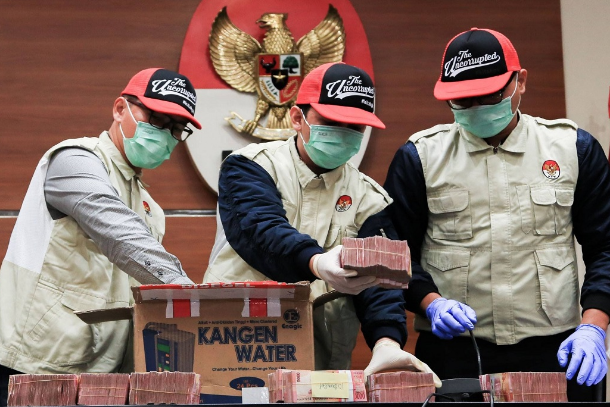 The Jakarta Corruption Court has sentenced the former chairman of the Islam-based United Development Party (PPP), to two years in prison in a bribery case linked to the handing out of promotions at Indonesia’s Religious Affairs Ministry.

Muhammad Romahurmuziy was found guilty of taking bribes amounting to 346.4 million rupiah (US$25,350) from two ministry officials in return for helping them get promotions by influencing then minister Lukman Hakim Saifuddin, also a PPP member.

Haris Hasanuddin was later promoted to head the provincial religious affairs office in East Java province, while Muafaq Wirahadi was promoted as head of the ministry’s district office in East Java’s Gresik district. The pair were sentenced to two years and 18 months in prison respectively.

The sentence given to Romahurmuziy, who was arrested by Corruption Eradication Commission investigators in March last year, was lighter than the four years demanded by prosecutors.

Father Paulus Christian Siswantoko, executive secretary of the Indonesian bishops’ Commission for the Laity, said corruption has been a serious issue at the Religious Affairs Ministry for several years.

“This is a ministry which has become tainted by corruption even at the highest level. Former minister Suryadharma Ali was jailed for graft,” he told UCA News.

Ali was sentenced to six years in prison in January 2016 for mismanaging hajj pilgrimage funds in 2010 and 2013 and for misusing ministerial funds for his own personal benefit. He was also fined 300 million rupiah and ordered to pay compensation amounting to 1.8 billion rupiah.

The judges said Ali, who was also a former PPP chairman, misused state funds to take his family and friends on two free trips to the hajj.

“It is really ironic. This ministry should promote morality, integrity, honesty and fairness. However, it seems hard to find these values at the ministry as corruption often occurs there,” Father Siswantoko said, urging the government to build up integrity and virtue at the ministry.