A Catholic lay minister sprinkles ash on the head of a woman during an Ash Wednesday Mass at a church in Manila on Feb. 17, marking the start of Lent. (Photo: Jam Sta Rosa/AFP)

The Philippines has begun relaxing restrictions imposed on churches to curb the spread of the coronavirus by allowing more people to attend Masses and other services.

As of now, the Inter-Agency Task Force for the Management of Emerging Infectious Diseases (IATF) has lifted the 30 percent maximum seating capacity in churches.

“We started to allow on February 15 religious gatherings up to 50 percent of the seating or venue capacity of churches,” he said.

Children and those over 60, however, are still barred from attending religious mass activities, he added.

Churchgoers were delighted at the news.

“We would like to thank our health authorities for listening to the call of our bishops to allow more parishioners to enter churches. We received reports saying that churches are not the spreaders of the virus provided health protocols are followed,” said a group of altar servers in San Jacinto Parish in Quezon City, Manila.

Roque’s announcement meant clergymen would celebrate more Masses on Sundays and during Lent, they said.

A group of catechists also thanked health authorities for listening to the call of Manila apostolic administrator Bishop Broderick Pabillo. 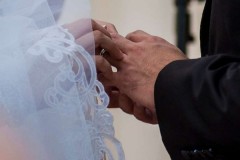 Bishop Pabillo earlier called for restrictions to be relaxed, saying Masses would not cause virus clusters if proper protocols were in place.

“It’s a blessing the IATF has allowed more people to enter churches. Celebrating Mass on television is very different compared to attending it in person. One can really feel the presence of Christ in a church attending a live Mass,” said Mariel De Guzman, a catechist in Manila Archdiocese.

De Guzman also said that more churchgoers needed to attend Mass because of the psychological “ill effects” lockdowns had brought on many churchgoers.

“With the economic problems that we [Filipinos] have … job retrenchments, lack of job opportunities, expensive Covid testing, to whom can we go? To Jesus. Only to Christ. He gives us hope during this desperate time,” De Guzman said.

The bishops’ conference, however, reminded churchgoers not to take the virus lightly, especially the new “UK strain” that has been spreading in the Philippines.

Its executive secretary, Father Jerome Secillano, said all churchgoers should remain cautious and must reveal if they experience Covid symptoms after a service.

“Covid-19 hasn’t been extinguished yet from our midst. We are still not safe from this virus and its unpredictable nature makes it a major threat to everyone’s health,” Father Secillano told Radio Veritas.