Nine priests and their parishioners pose for a photo in front of the nativity scene at Dong Kieu Church Dec. 14 erected for the coming Christmas celebrations. (Photo courtesy of thanhnienconggiao)

Catholics in northern Vietnam have been ordered by local officials to dismantle a "nativity" scene in their parish made up of objects representing the birth of Jesus.

Dong Kieu Church, at the center of the row, is located in Dien My Commune of Nghe An Province.

A local witness said police and military personnel had been deployed around the church.

Many Catholics, including from neighboring parishes, had gathered to protect the nativity being erecting on land they say is part of the broader church compound.

"We strongly oppose their illegal and unreasonable demand," one man said.

They accused them of erecting it on land that is the subject of an ownership dispute.

However, Church sources maintain that the land was donated to the parish.

They complained that on the evening of Dec. 13, a group of "gangsters" destroyed colorful electric lights and other decorative Christmas items on the road leading to the church. 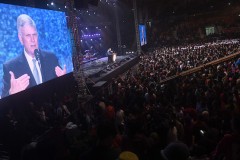 The priest accused local authorities of backing the gangsters to harass local Catholics.

Communist supporters known as the "Red Flag Group" have allegedly threatened violence over erection of the nativity scene.

However, Father Ke said police and authorities had failed to take action against them.