Good or bad nations do not exist, pope tells Trinitarians

Wickedness is everywhere, he tells participants in the International Trinitarian Solidarity conference 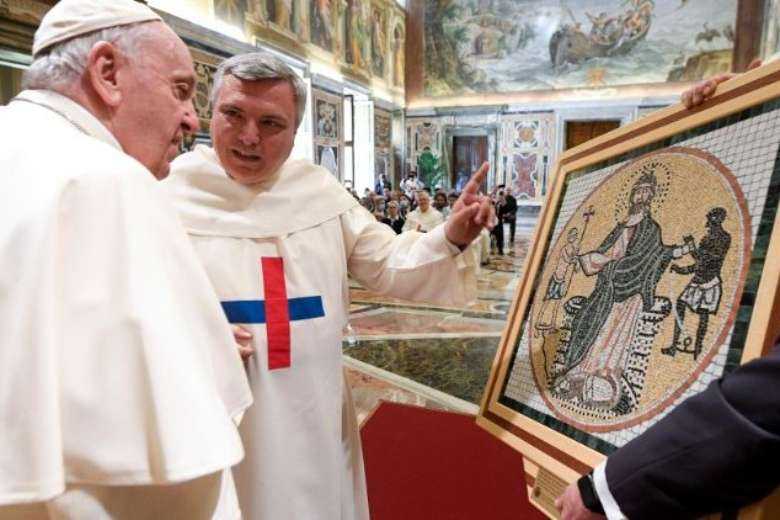 There is no such thing as a "good" or "bad" nation because wickedness can be found everywhere, Pope Francis said.

"Once there was a habit of dividing humanity into the good and the bad: 'This country is good,' 'But it makes bombs!' 'No, it's good and this one is bad,'" he said in off-the-cuff remarks on April 25 at the Vatican.

"No. Today wickedness has pervaded everyone and there are good and bad people in every country. Wickedness, today, is everywhere, in every nation. Perhaps even at the Vatican!" he said.

The pope made his remarks during an audience with members of the Trinitarians who were in Rome attending an annual conference of Trinitarian International Solidarity, the order's international organization that supports communities of persecuted Christians.

The Trinitarians were founded by St. John de Matha in the 12th century to promote devotion to the Holy Trinity. In the beginning, the order's unique apostolate was the ransom of Christians held captive by nonbelievers during the Crusades, reflected in their formal name of the Order of the Most Holy Trinity and of the Captives.

Today, the order's apostolate includes parish ministry, education, chaplaincies in prisons and hospitals, and work with the homeless, and they also offer solidarity with and advocate on behalf of victims of persecution, torture and oppression.

The pain, he said, is being caused by "that affliction that, once upon a time, was called Nun's Knee" because it is most often caused by frequent kneeling

Pope Francis thanked them for their special charism, which is "flagrantly timely, unfortunately."

Today, the world boasts that slavery has been abolished, "when, in reality, there are many, too many men and women, even children, reduced to living in inhumane conditions, reduced to slavery," he said.

Their conference on religious persecution also is timely, he said, because it is highlighting how "religious freedom is violated and sometimes trampled upon in many places and in different ways -- sometimes crudely and openly, other times subtly and hidden from sight."

The pope apologized for having to greet the members while he was sitting down because of his knee.

The pain, he said, is being caused by "that affliction that, once upon a time, was called Nun's Knee" because it is most often caused by frequent kneeling. The pope was referring to prepatellar bursitis, a condition in which the cushioning, fluid-filled sac in front of the kneecap becomes inflamed or infected and puts pressure on the adjacent parts of the knee.

He also told the Argentine paper La Nación recently that his limited mobility and pronounced limp are due to a torn or strained ligament in the knee. He said in that interview he was rejecting injections, preferring the use of ice and pain relievers.

On his doctor's orders, the pope once again canceled his day's scheduled appointments April 26, which was to include taking part in the day's session of the Council of Cardinals.