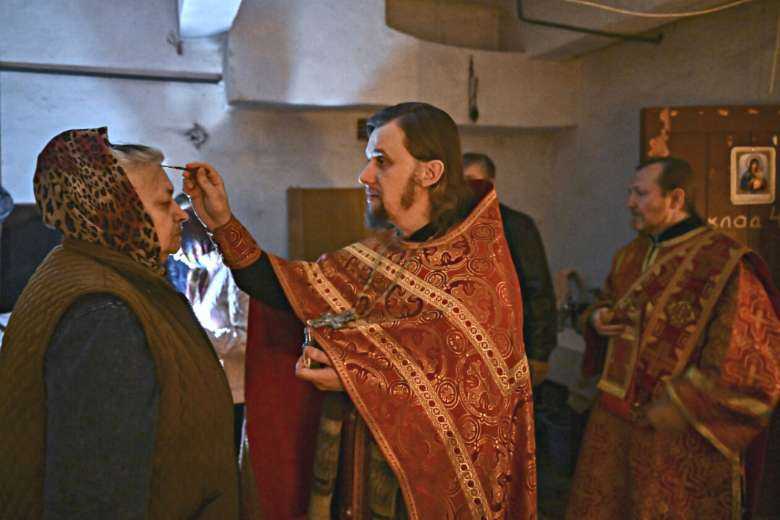 Orthodox priests pray with residents at a makeshift basement church at Lysychansk in the eastern Ukrainian region of Donbas on May 20. (Photo: AFP)

The echoes of artillery fire made Deacon Sergiy question his allegiances as he descended into a candlelit basement to lead prayers at a war-damaged church on the east Ukrainian front.

The rattle was coming from a Ukrainian artillery gun positioned a few dozen metres from the clergyman's house of worship in the battered and largely deserted industrial city of Lysychansk.

The rounds of return fire that whistled in a few minutes later came from Russian forces trying to smother Lysychansk and its sister city Severodonetsk in the third month of their assault.

And the deacon helping out with the service in the church's basement answered to the Moscow patriarchate — one of the branches making up the broader Orthodox Church of Ukraine.

This complex religious mix is particularly volatile in a largely Russian-speaking city at the forefront of Ukraine's battle for survival as an independent state.

"I am a Russian. But I was born in Ukraine and I wish it well. So I do not really like any of this," the deacon said of the shellfire that damaged his church's dome in the first weeks of fighting and forced his prayer services underground.

"The soldiers set up camp here at the start of the war and started shooting. I cannot condone it. But I also cannot take sides"

Half a dozen elderly coal miners and farmers bowed and crossed themselves in a dank basement that once served as a Soviet-era storage facility before being incorporated into the church.

The entire building — like the rest of the city — has had no power or running water for weeks.

"The soldiers set up camp here at the start of the war and started shooting," said the deacon. "I cannot condone it. But I also cannot take sides."

Russia's invasion has brought the war into Ukrainian cities and created moral dilemmas for soldiers trying to defend their country against a larger and more powerful military.

Ukraine has been forced to position artillery pieces and rocket systems deep inside residential districts to try and hold off the Russian advance.

This occasionally puts them in the immediate vicinity of apartment complexes and public buildings, making both susceptible to return fire and fueling locals' ire at the troops.

The artillery piece outside Deacon Sergiy's church was one of several firing from a hill looking north toward the battles raging across the smouldering remains of Severodonetsk.

Return fire smashed into the hills of Lysychansk from Russian positions stretching across the northern banks of a river splitting the two industrial zones.

"People should not be firing next to a church. It is horrible," mechanic Mychailo Paliy said during a break in prayers.

But the 49-year-old also admonished Patriarch Kirill — the head of the Moscow patriarchate overseeing the Lysychansk church — for blessing the Russian generals leading the war. "The patriarch should be praying for everyone and not just one side," Paliy said.

Ukrainian soldiers openly admit that they have struggled to win the trust of many locals in a region where Russia's reach stretches back to tsarist times.

"This war is an embarrassment for our people — for Ukraine and Russia. We should be embarrassed before the whole world"

The deacon's church was established when the area was still part of the Russian empire in the 1880s. It stands a few blocks from a well-supplied bakery that has been flying the red-and-black flag denoting the owner's allegiance to the Ukrainian army and the country's nationalist movement for the past three months.

Oleg Bogdanov had just completed his latest mission evading shellfire across the war zone to supply the bakery with flour and water from the central city of Dnipro.

He sounded exhausted but determined to help Kyiv's Western-backed leaders win over local hearts and minds.

"The city's military administration is asking me to help them because I have good contacts," the 48-year-old said. "I support their cause. I support the owners. Someone has to help them help these people."

Bogdanov seemed certain that Ukraine would be able to thwart Russia's attempts to encircle the twin cities.

"It will be hard for them to surrounded us. Believe me, I drive around and I see things," the driver said just moments before the main bridge linking the two cities was destroyed in unclear circumstances.

Its loss both isolates the Ukrainian troops still fighting to defend Severodonetsk and complicates Russian efforts to push south into Lysychansk.

Yet many in the region sound too mentally exhausted to care much about who was progressing along which front.

"This war is an embarrassment for our people — for Ukraine and Russia. We should be embarrassed before the whole world," retired coal miner Sergiy Davydchenko said after prayers.

"I feel that God should come before all else — including war."