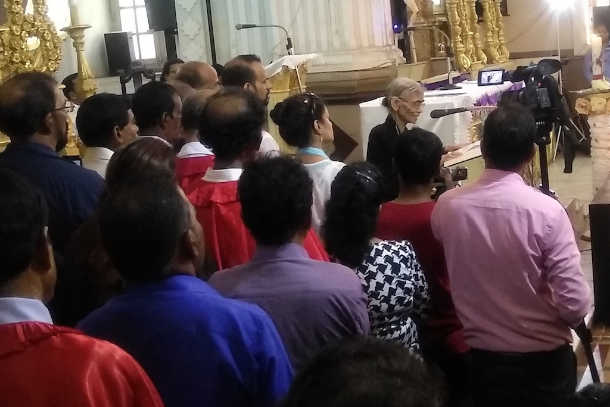 Maria Julia, 81, speaks at the Nov. 6 burial service for her son Jose Bismarque Desidor Dias, who was allegedly killed three years ago by people who opposed his campaigns to protect the environment in Goa. (Photo by Bosco de Souza Eremita)

The body of a Catholic priest-turned-activist was buried in western India after a three-year wait by his family and friends who suspect he was murdered for his strong stand for environmental protection.

Some 60 priests and 2,000 admirers of Jose Bismarque Desidor Dias joined the Nov. 6 burial service in his village of Sao Estevam in Goa state, a former Portuguese enclave.

The burial of Dias, a former Blessed Sacrament priest, was delayed after his friends and family sought a detailed probe into the mysterious circumstances surrounding his death.

Dias, 51, went missing on Nov. 5, 2015, after he went for a swim in a river near his home with friends. His body was found floating two days later. Local police claimed it was a case of drowning.

However, his family and associates delayed burial and demanded an investigation, suspecting that he could have been murdered by those who were angry with his campaign against mining and unbridled property development.

Following pressure, the Bombay High Court that also covers Goa in April 2017 ordered the state's specialized Crime Branch police to probe the case, considering it a murder. In March 2018, however, investigators submitted a closure report to the court asserting it was a case of drowning.

"Only the body of Dias is laid to rest, not the concept of justice. The fight for our fallen comrade will go on," said Sudip Dalvi, an associate of Dias who was among those pressing for court intervention.

Dalvi told ucanews.com a review petition has been filed in court. "But all connected with him thought it was time to give him a decent burial" and decided to do it on his third death anniversary, he added.

Pope Francis' May 2015 encyclical Laudato si' made him overjoyed because he felt he had the mandate of the pope. Dias was a "fearless witness to Christ in truth," Father Pereira added.

Dias mobilized people through music, rallies and meetings against large government and private projects including a golf course of a seven-star hotel and Goa's second airport.

Dias' 81-year-old mother Maria Julia in her eulogy recounted his call to priesthood and his love of serving people. He often left the house to attend to people's woes without meals, she recalled.

"He loved nature very much and that took his life … He was always telling us that he was being threatened by some people. He fought for the cause to save the village from destruction. I lost my son and it pains me," she said.

Dias left the priesthood to contest the 2012 state polls promising to check the environmental degradation of Goa, but he was not elected.