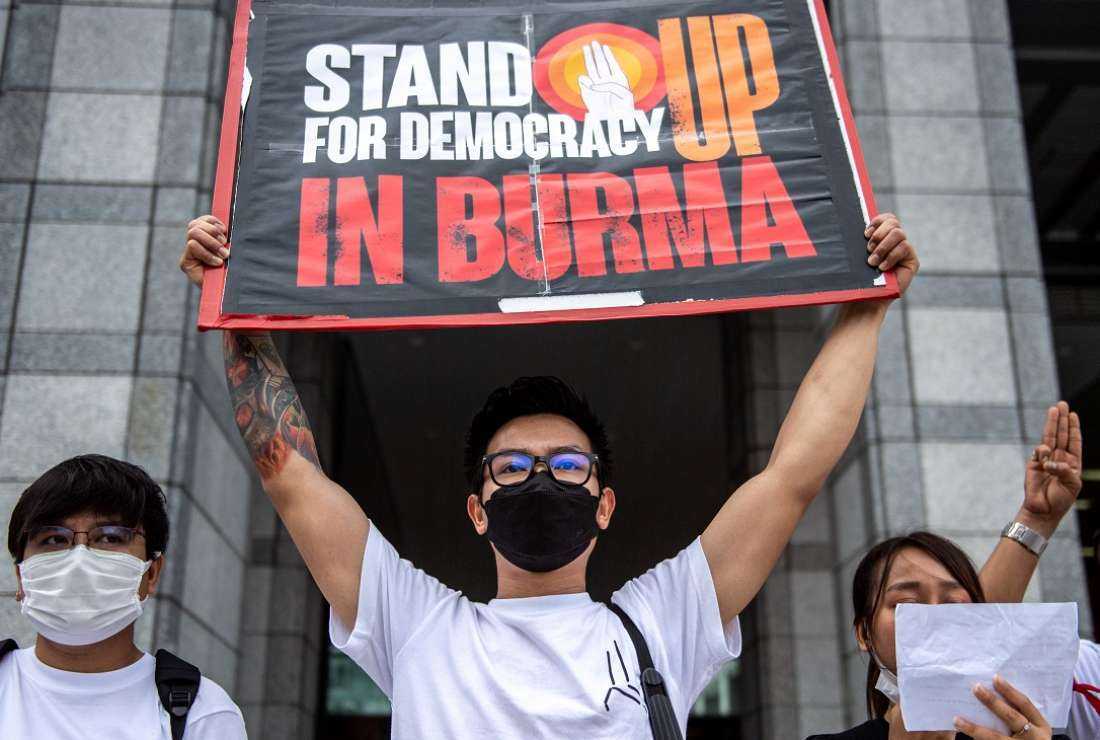 Activists take part in a rally to protest against Myanmar's junta execution of four prisoners, including a former lawmaker from Aung San Suu Kyi's party, outside the United Nations University in Tokyo on July 26. (Photo: AFP)

A global union of religious leaders has voiced solidarity with the people of Myanmar, especially after the execution of four pro-democracy activists by the military junta.

“As we hear these many cries of human and planetary pain, and as we pray and seek to relieve and assist with the little we have, and the little we feel we can practically do, we have not ceased to follow your trajectories of survival in Myanmar,” says the letter from Religions for Peace.

“We are with you in our minds, with our hearts, and with our souls.”

The letter signed by Azza Karam, secretary-general of Religions for Peace, was sent to Cardinal Charles Bo of Yangon over the weekend.

“We lament, alongside you, the executions which are taking place, at a time when more and more countries take steps to abolish the death penalty, the resumption of executions after more than three decades is contrary to the goal of abolition enshrined under international human rights law and standards,” the letter says.

"Your ability to not only face fearless but to overcome powerfully, multiple hurdles in the journey of your nation, is humbling"

The execution of four pro-democracy activists two weeks ago sparked global outrage against the military rulers who ignored appeals by the international community and the Association of Southeast Asian Nations (ASEAN) to halt them.

The executions, the first in more than three decades in the conflict-torn nation, are seen as an attempt to instill fear among the people who are offering strong resistance to military rule since the coup in February 2021.

“Your ability to not only face fearless but to overcome powerfully, multiple hurdles in the journey of your nation, is humbling,” the group said.

“Your individual and collective commitment towards human rights, democracy and reconciliation serves as a feat of endurance in this century, and as a testament to the power of human spirit, for so many, in your region, and around the world.”

The global group had appealed to the military leadership for the immediate release of political detainees, the restoration of civilian governance, and the continued advancement of peace and reconciliation efforts in Myanmar.

The Southeast Asian nation has been mired in a political, economic and humanitarian crisis after the military toppled the elected civilian government and arrested leaders including Suu Kyi on Feb. 1, 2021.

Backed by the UN, the US and the European Union, ASEAN has been leading diplomatic efforts to tackle Myanmar’s political crisis but has been ineffective in pressuring the military regime.

In a joint statement released on Aug. 5, ASEAN leaders expressed disappointment over the lack of progress in the peace plan agreed to by military chief Min Aung Hlaing at the regional bloc’s Jakarta summit in April 2021.