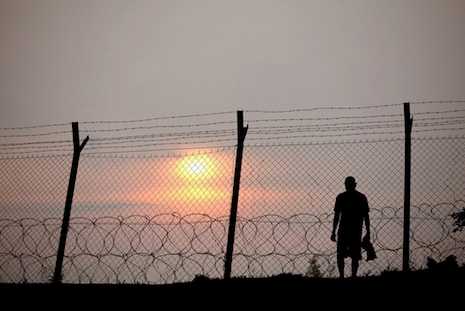 By US Department of State

In 2013, the world witnessed the largest displacement of religious communities in recent memory. In almost every corner of the globe, millions of Christians, Muslims, Hindus, and others representing a range of faiths were forced from their homes on account of their religious beliefs.

Out of fear or by force, entire neighborhoods are emptying of residents. Communities are disappearing from their traditional and historic homes and dispersing across the geographic map. In conflict zones, in particular, this mass displacement has become a pernicious norm.

In Syria, as in much of the Middle East, the Christian presence is becoming a shadow of its former self. After three years of civil war, hundreds of thousands fled the country desperate to escape the ongoing violence perpetrated by the government and extremist groups alike. In the city of Homs the number of Christians dwindled to as few as 1,000 from approximately 160,000 prior to the conflict.

Elsewhere, in the Central African Republic, widespread lawlessness and an upsurge in sectarian violence between Christians and Muslims reportedly resulted in at least 700 deaths in Bangui in December alone and the displacement of more than one million people throughout the country during the year.

Anti-Muslim violence in Meikhtila, Burma, led to up to 100 deaths and an estimated 12,000 displaced residents from the area in early 2013. This event showed that mob violence against Muslims was no longer confined to western Rakhine State, where over 140,000 persons have also been displaced since 2012. Although the government’s overall human rights record continued to improve, organized anti-Muslim hate speech, harassment, and discrimination against Muslims continued, exploited by those seeking to divide and pit Buddhist and Muslim communities against one another, often for political gain.

All around the world, individuals were subjected to discrimination, violence and abuse, perpetrated and sanctioned violence for simply exercising their faith, identifying with a certain religion, or choosing not to believe in a higher deity at all.

Militants in Pakistan killed more than 400 Shia Muslims in sectarian attacks throughout the year and more than 80 Christians in a single church bombing; the government arrested and jailed a number of those responsible for sectarian attacks, but it generally failed to prevent attacks. Both Shia Muslims and Christians faced violent and deadly attacks in Egypt, and Shia Muslims in Saudi Arabia continued to face discrimination and prejudice, as were others who did not adhere to the government’s interpretation of Islam.

In Iran, officials threatened, detained and harassed members of almost all non-Shia religious groups. Hindus and other ethnic and religious minorities in Bangladesh faced increased harassment and physical attacks amidst political turmoil while in Sri Lanka violent Buddhist nationalist groups destroyed mosques and churches while security forces simply stood by.

China prosecuted family members of self-immolators, imprisoned and tortured Falun Gong practitioners, continued its harassment of members of house churches and unregistered Catholic bishops and priests, and sought the forcible return of ethnic Uighurs who were seeking asylum overseas.

Members of unregistered religious groups were continuously intimidated in Eritrea, where 1,200 to 3,000 people were imprisoned because of their religious beliefs.

Throughout Europe, the historical stain of anti-Semitism continued to be a fact of life on Internet fora, in soccer stadiums, and through Nazi-like salutes, leading many individuals who are Jewish to conceal their religious identity.

And yet, amidst the darkness of religious strife lay inspiring and unheralded acts of interfaith solidarity. Following the deadly Peshawar church bombing in Pakistan resilient Muslim community members formed human chains around churches during services in a show of solidarity and to stand up against senseless violence. In Egypt, Muslim men stood in front of a Catholic church to protect the congregation from attacks.

And after an increase of mosque attacks in the United Kingdom, a local orthodox Jewish neighborhood watch team began assisting Muslim leaders to ensure safe access to mosques and alert them to possible attacks.

Source: US Department of State