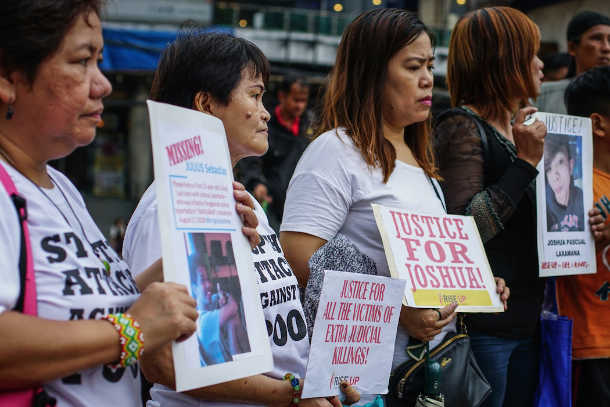 Relatives of people killed in the government's war against illegal drugs stage a protest in Manila on Sept. 7 to call for justice for their loved ones. (Photo by Jire Carreon)

The conviction of a decorated Philippine army general for decade-old crimes has fueled hope among mothers of those killed in the government's war on drugs that they will eventually see those responsible for the deaths of their loved ones pay for their crimes.

Nanette Castillo, whose 32-year-old son was killed by anti-narcotics "vigilantes" in 2017, said if the mothers of the victims of Major-General Jovito Palparan had not fought for justice, he would have gotten away with his crimes.

Palparan was found guilty on Sept. 17 of kidnapping university students Karen Empeno and Sherlyn Cadapan. He was handed a life sentence. Human rights groups had labeled him "The Butcher" and accused him of being behind dozens of extra-judicial killings in areas where he had been assigned.

Castillo, a campaigner of the ecumenical group Rise Up for Life and Rights, said she identifies closely with the parents of the missing students "because they were also told that vigilantes were behind the abduction of their daughters."

"Vigilante is just another word for military or police officers who try to mask their role in extra-judicial killings," Castillo told ucanew.com.

Another mother of a drug war victim, Normita Lopez, fished out a tattered slip of paper from her purse after hearing the news of Palparan's conviction. It contained a poem she wrote for her son, Djastin, who was shot dead by police in May 2017.

"Before my eyes close in this life, may your killers be brought to justice, my child," said Lopez reading the last line of her poem.

"My heart jumped at hearing about the conviction," she said. "It took 11 years. Maybe like Sherlyn and Karen, my son will not get justice here while [President Rodrigo] Duterte remains in power, but one day, I know that one day, he will get what is due," said Lopez.

Lopez and half a dozen other relatives of drug war victims have filed a suit with the International Criminal Court, charging Duterte with crimes against humanity.

According to police about 5,000 drug suspects have been killed in "legitimate police operations" since 2016 when Duterte came to power and declared a total war against illegal drugs.

Human rights groups claim assassins have killed more than 23,000 people, whose cases have been lumped under the category "homicides under investigation."

"Even if I die without getting this wish, I can face my son and say, 'I did not abandon you,'" Lopez said.

"Every tragedy is personal but experience has taught us to empathize with others," said Emily Soriano, who on Dec. 28, 2016, lost her 15-year-old son, Angelito, who was killed with six other young people in what police said was an operation to arrest a drug suspect.

"From my tragedy, to our tragedy as a people; that is now the story of my life," she said.