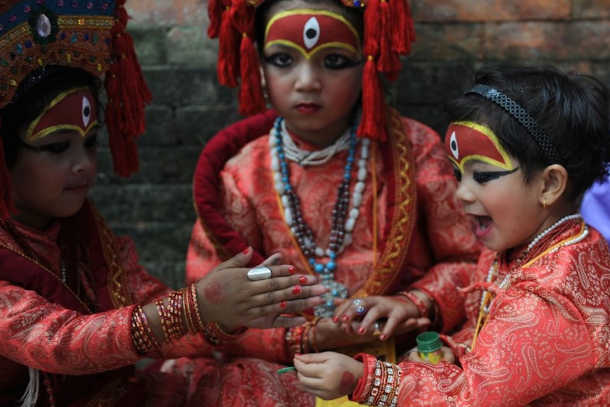 Nepalese girls dress in the outfit of Kumari, the living goddess, before the start of the Kumari Puja rituals in Kathmandu in this 2011 file photo. Around 504 girls under the age of nine were brought to the temple for mass worship, protection from evil and good luck as crime rates targeting women and children continue to rise. (Photo by Prakash Mathema/AFP)

Some of my friends recently came up with a proposal to run self-defense training programs for young girls.

At first I thought that even though women and children do occasionally face the threat of violence, Nepal is a relative safe haven for girls, so why would they need to learn some kind of martial art? But how wrong I was.

Indeed, it is alarming to see how quickly the crime rate has risen. The country's official police website report shows the rate has jumped by almost a quarter in the last fiscal year alone, building on a worrying trend that has seen more crimes committed year after year.

And crimes committed against women and children, including rape or attempted rape, are among the fastest rising.

Some media reports claim there has been a four-fold increase in reported rapes in the last decade, with the majority of victims being young girls. Moreover, a lot of cases are known to go unreported due to sex still being a relatively taboo subject in Nepal.

Some 1,131 cases of rape were reported to the Women and Children Service Directorate of the Nepal police in 2016/2017.

In 66 percent of the cases, the victims were under 18, while a total of 19 percent were younger than 10 years old. Meanwhile, 51 percent of the 536 cases of attempted rape reported involved young girls.

Children in Nepal also have to contend with high rates of dwarfism (36 percent), malnourishment (27 percent), child labor — the country's Multiple Indicator Cluster Survey (MICS) in 2014 indicated that 37.4 percent of children aged 5-17 were working — and young marriages, with over a quarter of the population married by the age of 18.

In order to save children from being abused, the Central Child Welfare Board reported last year that there were 23,000 "children's clubs" operating nationwide to safeguard their rights.

The "clubs" have emerged as an important democratic institution managed by children with the support of an adult facilitator.

Article 39 of the constitution provides comprehensive guidelines for the protection and promotion of children's rights but the government still lacks a clear road map for how to put this into action.

To address this shortcoming, government bodies at a local, provincial and federal level have been consulting one another recently to draft new child-protection policies.

Now local governments are promoting Child-Friendly Local Governance (CFLG) based on 39 indicators. Moreover, the government's Center Child Welfare Board (CCWB) and District Child Welfare Boards (DCWBs) in 77 districts are carrying out programs to raise awareness of the dangers children face, protect them from abuse, and provide legal support.

The CCWB has reportedly also proposed that a National Children's Council be set up, as well as children's rights committees at both district and municipal levels.

The government is also promoting and supporting a children's helpline where people can call 1098 for an immediate response.

In response to the rising number of rapes, the Ministry of Information and Communication decided to ban pornographic websites and material from Sept. 21 of this year in line with Article 121 of Nepal's Criminal Code Act 2017.

In a press release, the ministry said that broader access to pornographic sites has created aberrations in society, upset social harmony, and abetted sexual violence.

Other laws prohibit the production and dissemination of sexually obscene content online and offline.

But despite these efforts, household poverty remains a major cause of some of the issues children face, including child labor, the trafficking of young persons, high school-dropout rates, child marriages, the abuse of children, corporal punishment at schools, and more.

In short, not enough is being done to address the root causes of the violence and other problems, which need to be better managed and controlled.

Even though international agreements indicate that governmental entities are responsible for protecting at-risk and working children, such entities are institutionally weak and face severe financial constraints.

Awareness of the risks children face should have reached the household level and be promulgated in local languages, too.

Children in rural areas where there is little or no internet access are at the highest risk of sexual violence, suggesting the ban on pornographic sites will do little to make their lives safer.

Nepal has been a party to the Convention on the Rights of the Child (CRC) since 1990. Since then it is believed to have made considerable progress in protecting the rights of children, including ratifying agreements to combat trafficking, child prostitution, child pornography, and the involvement of children in armed conflict.

Now it is the time for Nepal to ratify the CRC protocol to ensure there is a proper system in place for them to communicate their complaints as part of a United Nations-instigated system that ensures their rights are protected.

To counter all of the above-cited problems, civil society organizations that are working to protect children need to have their powers enhanced.

*Greater awareness is needed of how to promote a balanced diet and other fundamental rights related the health of children and women, including vaccinations and technical support so parents can cook nutritious meals.

*Children should be encouraged to participate in the planning process through their clubs, networks, other forms of collaboration, and measures to advocate for their rights at both the national and international level.

And of course, bringing the perpetrators to justice should be the main action to be taken, despite an overriding culture of impunity in Nepal based on people's access to power.