Mismanagement of Covid-19, corruption, nepotism and human rights violations are their main reasons for wanting to emigrate 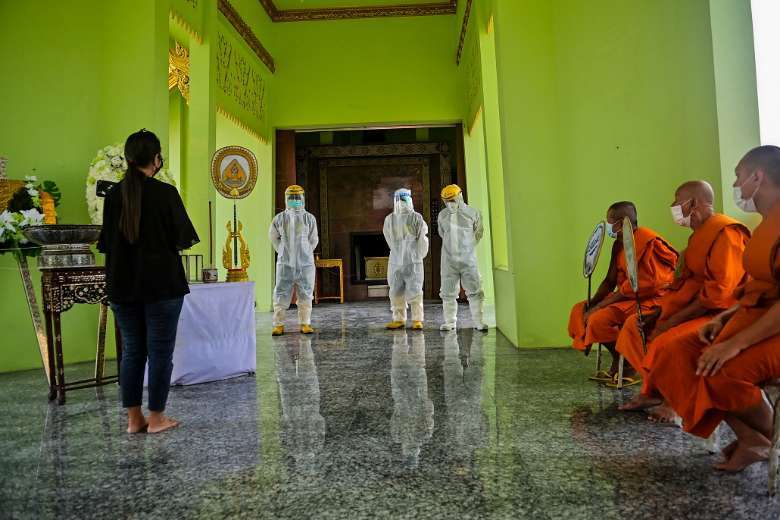 Buddhist monks and rescue volunteers oversee the funeral of a woman who died after contracting the coronavirus at Wat Rat Prakhong Tham in Nonthaburi on May 5. The Thai government has been criticized for its mismanagement of the Covid-19 crisis. (Photo: AFP)

Hundreds of thousands of young Thais have sent a resounding message to their country’s conservative establishment, which they see as hopelessly corrupt and incompetent: given a chance, they would love to go and live somewhere else.

In recent days more than 850,000 Thais have joined a new private Facebook group called “Let’s move out of this country” since the social media campaign was launched on May 1.

Numerous young Thais have also been taking to social media to vent against their government while stressing in post after post that they were “sick and tired of living in Thailand.”

Many commenters have cited their government’s mismanagement of the Covid-19 crisis while others have highlighted recent cases of corruption, nepotism and human rights violations as their main reason for wanting to emigrate.

High among grievances, based on online posts and comments, are repeated delays in the government’s shambolic vaccination campaign, even as a new outbreak of Covid-19 threatens to spiral out of control largely as a result of haphazard government policies.

A large-scale lockdown, the third in a year, in Bangkok and elsewhere has dealt another blow to the already faltering economy and deprived millions more of any income while social benefits from the government have been practically non-existent.

Under this government I see no hope for my future. My life has been getting worse and worse

“I love my country, but I can’t take the [expletive] that goes on here anymore,” Suwichai Phakdee, an unemployed 26-year-old Bangkok resident, told UCA News.

“Under this government I see no hope for my future. My life has been getting worse and worse.”

Prime Minister Prayut Chan-o-cha, a former army chief who seized power at the head of a junta by ousting an elected government in May 2014, has repeatedly promised to contain the Covid-19 pandemic by making vaccines freely available to all Thais and foreign residents.

So far, however, only around 1 percent of Thais have received jabs. A mass vaccination drive is expected to kick off on June 7, but mixed messages from the government about the availability of vaccines and the rate of vaccination have frustrated numerous Thais, especially young people. Many of these have said they were exploring options to fly abroad to get vaccinated there as they could not trust their own government.

Also at issue have been new allegations of systematic corruption and nepotism in Prayut’s government in the wake of a dubious decision by the country’s highest court.

The Constitution Court ruled on May 5 that a government minister, Thammanat Prompao, who has been revealed to have spent years in prison in Australia for heroin trafficking, could retain his post despite a provision in the country’s military-drafted latest constitution that prohibits people with criminal records from holding public office. Thai law also prohibits anyone found guilty of narcotics offences from holding public office.

Thammanat pleaded guilty in 1993 to helping import 3.2 kilograms of heroin into Australia and was sentenced to prison a year later.

However, Thailand’s Constitution Court argued unanimously in its ruling that the conviction of Thammanat, an influential politician said to be close to Prayut, had no bearing on his status in Thailand. “The verdict of any state only has effect in that state,” the court argued.

The decision has sparked widespread outrage among young, democratically minded Thais, many of whom have been supporters of a youth-led grassroots pro-democracy movement that wants to see a reform of Thailand’s ossified political system where the military has an outsized role.

The court’s judgment has provided further proof that “there’s no rule of law in Thailand, only the rule of power,” said Voranai Vanijaka, a prominent Thai political commentator.

“This is arguably Thailand’s lowest point in its international life. This verdict will have far-reaching repercussions for Thailand’s role and standing in the world,” Thitinan said.

Some prominent Thai human rights activists have been likewise unstinting.

“With this shocking ruling by the Constitutional Court, now all sorts of criminals convicted in foreign courts could run for a public office in Thailand without a worry,” said Sunai Phasuk, a Thailand-based researcher for Human Rights Watch.

In the face of blatant judicial favoritism like this, it is no wonder that many young Thais feel despondent about their future in their homeland, said Somchai Srisutthiyakorn, a former member of the Election Commission, whose role is to oversee democratic elections.

“These [young] people do not hate the country,” Somchai said. “Instead, its rulers have made them feel Thailand is no longer a good place to live, so they want to go.”