German Synodal Assembly opens with calls for change, but some object

All resolutions must be adopted by a two-thirds majority of all delegates present, plus two-thirds of all bishops must approve 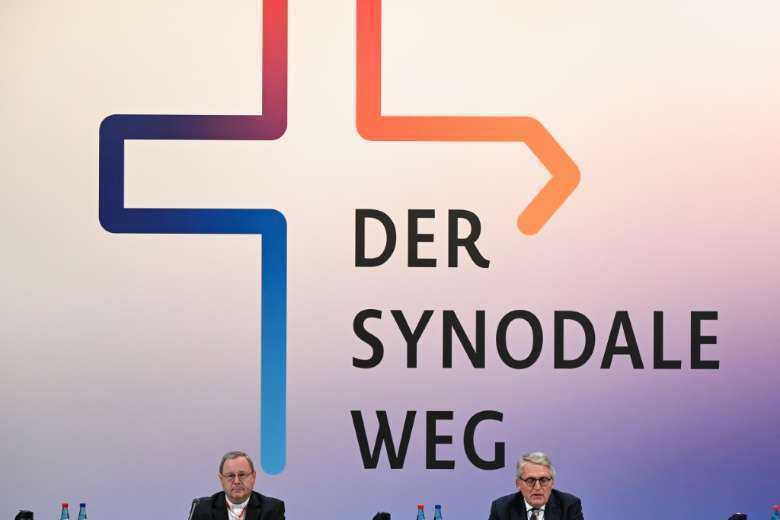 Thomas Sternberg (right), president of the Central Committee of German Catholics, and Georg Bätzing, bishop of Limburg and president of the German Bishops' Conference, open the Second Synodal Assembly of the Catholic Church in the Forum of the Mass. (Photo: AFP)

The third German Synodal Assembly spent hours discussing church issues and, by the end of its first day, adopted two texts that delegates hope will bring change and more democracy to the church. A vote on the election of bishops was delayed until the second day of the Feb. 3-5 meeting in Frankfurt.

All resolutions must be adopted by a two-thirds majority of all delegates present, plus two-thirds of all bishops must approve.

This was the third of five assemblies of the Synodal Path, organized to revitalize the church and restore trust following a September 2018 church-commissioned report that detailed thousands of cases of sexual abuse by Catholic clergy over six decades. Assembly delegates were under pressure to produce change.

During the day's discussions, an emotional Benedictine Sister Philippa Rath told delegates: "Religious order people call me and ask if they can leave the church and still remain a member of the order."

She said she used to say, "I suffer because of my church but I love my church," but, today, she cannot say if she loves the church.

"I hope that we don't talk and dilute, but that we work again alive in the Spirit. Let's take courageous steps, and let's not disappoint people once again," she said.

We are at a crossroads. I don't want to think what will happen if this text does not pass

Cardinal Reinhold Marx of Munich and Freising said during the plenary session, "It is important to recognize the signs of the times and tread new paths."

An emotional Bishop Stephan Ackermann of Trier, the bishops' representative for questions of sexual abuse in the church, said the basic text on division of power was holding up a mirror for bishops, while another delegate, Father Werner Otto said: "We are at a crossroads. I don't want to think what will happen if this text does not pass."

Regensburg Bishop Rudolf Voderholzer repeatedly disagreed with other bishops in the plenary session. On the diocese's website, he published a statement, part of which he repeated in the assembly, saying he "would like to see a scientific examination of the prerequisites and secret agendas of all the (sexual abuse) studies repeatedly cited here."

"And the suspicion arises that the real problem of the past decades has been that clergy have adapted too much to the spirit of the times and have maintained too little their clear profile, fed by the church's teaching of the belief of a God-given sexuality in marriage between man and woman. The reforms of the Synodal Path, however, are obviously also to a great extent adaptations to the spirit of the times and a dilution of our profile."

Earlier, Limburg Bishop Georg Bätzing, president of the bishops' conference, said he is in favor of allowing priests to marry. Citing examples of Eastern Catholic parishes, he said at a pre-assembly news conference that priests should have the free choice between celibacy and married life.

Bishop Bätzing also said the executive committee of the Synodal Path and Cardinal Mario Grech, general secretary of the Vatican Synod of Bishops, would have regular discussions on the content and structures of the church reform process in Germany.

"This is a big step forward," Bishop Bätzing said.

During the news conference, Osnabrück Bishop Franz-Josef Bode, vice president of the Synodal Path, expressed optimism that the German Catholic Church's major reform project was heading in a good direction.

"In this Synodal Assembly, we see for the first time that all the forums are bringing into the deliberations not only basic texts that serve as a general orientation, but also action texts that mean concrete changes," Bishop Bode said.

"The Synodal Assembly is an important visible step of a church struggling with itself and searching for perspectives in a profound crisis. The current convulsions threaten to paralyze church life. The Synodal Path wants to provide answers," he said.

The assembly normally consists of 230 members -- including laity, academics, clergy and bishops -- but because of COVID-19, there were only 213 delegates. The Synodal Path is divided into four forums that discuss the position of women in the church, future management and division of power, Catholic sexual morality and priestly celibacy.

Christian Weisner, spokesman for the grassroots movement We Are Church, told Catholic News Service after the first day that even more than the two-thirds majorities reached to pass certain items, "the theological justifications developed show what an important stage the Synodal Path in Germany has now reached on the way to becoming a church that is both growing together in community and being renewed."