The buzz of text messages from campaign volunteers, handwritten political postcards mailed from out of state, along with a barrage of advertisements, came to a halt after the U.S. Senate runoff elections in Georgia on Jan. 5.

Some parishes in the Archdiocese of Atlanta continued the tradition of serving as polling stations. Catholics saw the election season as an opportunity to live their faith through civic engagement.

Cecilia Houston-Torrence, 61, a member of St. Anthony of Padua Church in Atlanta for more than 30 years, was active in this election season. She served as a poll watcher for more than 20 years, but wanted to do more during the general election and runoffs in Georgia. She encouraged friends and family to get involved and to vote.

"So many things we believe in are at stake," said Houston-Torrence. "We need to be active."

She encouraged Catholics to know what they were voting for before casting their ballots.

"Know who you're supporting when voting for candidates, know the legislation," said Houston-Torrence.

"The political process is an extension of living out our faith," said Harris. "We must engage and stand for what is right, stand for the poor, stand for the needy, stand for the imprisoned, for those people who have no other voice. We are called to be the voice of God for the people of God."

Some parishes are long mainstays as polling locations where voters decided who would represent the state in the U.S. Senate. In the runoff, incumbent Republican Sens. David Perdue and Kelly Loeffler were defeated by Democrats Jon Ossoff and the Rev. Raphael Warnock.

In Sandy Springs, St. Jude the Apostle Church has been a longtime partner with the Fulton County Board of Elections. Hosting a polling site has been going on so long that current staff could not say exactly when the tradition began. One interruption was last June's primary, when the parish was closed in response to the coronavirus pandemic. 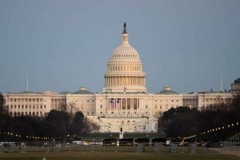 "Serving as a polling station is an opportunity for the parish to support all of our neighbors to exercise their right to vote. And if a local resident happened to be new to the area, or had a question for us, we would be happy to assist," said the pastor, Msgr. Joe Corbett, in an email.

Colleen Tyner, the director of parish operations, said collaboration between the Fulton County Board of Elections and the parish helps make voting go smoothly.

Touch-screen voting machines were set up in the ministry building. Poll workers showed up for the election around 5 a.m. Workstations were set up the day before.

With the constant communication between the board and the church, and the familiarity of how it will unfold, there is no disruption to the parish life, Tyner said. The Catholic Church teaches a respect for the democratic process, and this is how we show it, she said.

During the November election, voter turnout at the parish polls reached close to 80% -- and that was surpassed in the January runoff. Both times, voters endorsed the Democratic candidates, according to public records from the Fulton County Board of Elections.

In Georgia, candidates must have more than 50% of the vote to win races in congressional, state executive and state legislative elections. No candidate in the state's U.S. Senate races met those requirements in the Nov. 3 general election.

Rev. Warnock, senior pastor of Ebenezer Baptist Church in Atlanta -- the spiritual home to the Rev. Martin Luther King Jr. and the late Rep. John Lewis -- was recognized for his community service in 2013 when Catholic Charities Atlanta awarded him its Archbishop Donoghue Award. The award honors "acts of charity, compassion and other contributions that have significantly impacted individuals, families, and children living in Atlanta and North Georgia."

The Baptist congregation often collaborates with Our Lady of Lourdes Catholic Church, a block away, for special events.

Rev. Warnock also worked on environmental issues, using Pope Francis' "Laudato Si'" environmental encyclical as a guide, and he also advocated against the death penalty with Catholics and other faith-based organizations.

St. Philip Benizi Church in Jonesboro has long partnered with Clayton County Board of Elections to host a polling place in its parish hall.

The friary of the Conventual Franciscans who staff the parish sits on the grounds. The handful of friars living there typically have a short walk to cast their ballots, but during this time of the coronavirus, they either voted before election day or with absentee ballots at the Clayton County Courthouse, said Conventual Franciscan Father John Koziol.

He said serving as a polling place "broadens the circle" of people who know of the parish to include those who may not otherwise venture into a Catholic church. It's also important to be a part of the community and for the community to know the parish, said Father Koziol, the pastor.