Christians, charities and wealthy individuals donate food and cash to underprivileged families and the jobless 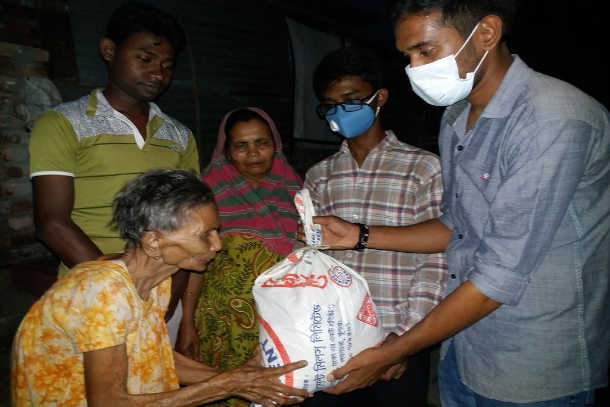 On March 30, half a dozen young Catholics packed bags with rice, lentils, salt, oil, potato and soap inside a room near St. Joseph’s Cathedral in Khulna district of southern Bangladesh.

These bags were distributed to 45 poor and underprivileged families who have been badly hit by the loss of work and income due to the nationwide shutdown over the Covid-19 outbreak.

Disturbed by the suffering of poor and low-income people, St. Joseph Unit of Bangladesh Catholic Students' Movement (BCSM) came up with the initiative.

The group received donations from Christians from home and abroad as well as Muslims to provide food and daily essentials to these families for up to one week.

“I appealed to our brothers and sisters of the unit to do something to help underprivileged families who cannot go to work and don’t have money to buy food during this lockdown. We can provide food for them for at least one week,” said Hubert Sony Ratna, a former BCSM leader and secretary of the Justice and Peace Commission in Khulna Diocese.

Ratna also appealed to wealthy Christians and groups to support the initiative by offering 410 taka (US$5) to fill at least one bag for one poor and needy family during the crisis.

Chittagong Archdiocese in southeastern Bangladesh has come up with a similar scheme to support helpless people. Its desk for professionals has collected 500 taka from up to 200 Catholics at Our Lady of the Holy Rosary Cathedral Church.

“I discussed the idea with the members and informed Archbishop Moses Costa, who greatly appreciated it. We agreed to collect cash and distribute it to needy families,” said James Gomes, coordinator of the desk.

Some 100 families have been listed and each family will receive 1,000 taka.

“We have started it from the cathedral parish, and this initiative will be extended to all parishes in Chittagong Archdiocese as long as it is needed,” Gomes added. Generosity pours in for the poor

The Muslim-majority nation of more than 160 million has recorded 49 positive cases of Covid-19, while 19 have recovered and five have died, according to the state-run Institute for Epidemiology, Disease Control and Research on March 31. A total of 1,338 individuals have been tested for the virus so far.

Globally, the coronavirus has infected more than 858,000 people and killed 42,151, according to Johns Hopkins University data on April 1.

Critics say the official number of infections and deaths in Bangladesh remains low due to extremely inadequate testing amid a serious scarcity of testing kits and personal protective equipment for doctors and medical staff.

The government shut down all education institutes from March 17 to April 9 and enforced a nationwide holiday-cum-lockdown until April 4, which is expected to be extended for another week.

The shutdown has put millions of poor who live hand to mouth in misery due to loss of work and income. However, there has been an outpouring of generous support for the poor and needy from individuals and institutions in recent days.

The government started selling subsidized food items for poor across the country from March 26.

The Ovijatrik Foundation has collected donations to offer food items to about 10,000 people for 15 days across Bangladesh.

Members of the police this week distributed food items to 100 slum dwellers for one week from their personal funds.

Muhammad Kamrul, a driver for Dhaka businessman Abu Ahmed Siddiqui, has been distributing groceries to about 100 day laborers in the capital over the past few days. Kamrul goes out on the streets with bags full of groceries to give to those needing help.

In Sylhet town in the northeast, Farmis Akter, a wealthy housewife, cooks food for about 100 people every day and then drives around the city to hand it out among poor people.

She was shocked to see a poor mentally challenged man faint due to hunger last week and started her food scheme.

“These people have no work, no income and no food. They may die of hunger if not of the coronavirus. So, I cook food every day, put the dishes in my car and find people on the streets who are hungry,” Akter said.

In Barishal district in the south, a group of journalists have been providing dinner for some 200 people every night since March 23. Leaders and members of Barishal Press Club have been funding the initiative to support poor people who lost their work and income.

“Local journalists gather in the evening and donate money. Then food is cooked and distributed among poor people. It will continue as long as the crisis persists,” said press club secretary S.M. Zakir Hossain.