Generosity comes to the rescue for ailing ex-prisoner in Vietnam 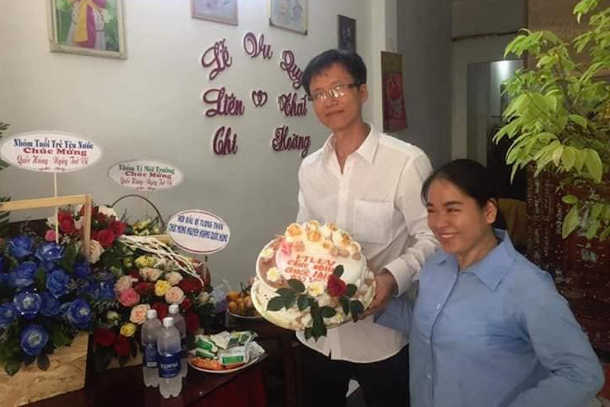 A gold necklace was among the donations given to help an ailing former prisoner of conscience in Vietnam pay for his medical expenses.

The necklace, which has an S-shaped map of Vietnam at its center, was auctioned online to raise funds for Nguyen Hoang Quoc Hung, one of the founders of the Viet Labor Movement.

“Hung has been unable to cover his medical treatment costs,” said Hanoi-based Nguyen Thuy Hanh, who runs a charity fund for former prisoners of conscience and rights, democracy and environmental activists who have been jailed.

Thuy Hanh said Hung’s mother died while he was in jail and now he lives with his elderly father.

She said that 34-year-old Mary Do Thi Minh Hanh, also a co-founder of the Viet Labor Movement, offered the necklace to be auctioned for Hung’s cause.

The woman who bought the necklace then gave a further 20 million dong to help pay for Hung’s medical expenses. Others also stepped forward to help cover costs.

“Many other people, including a married couple who are former prisoners of conscience, have made handsome donations to Hung,” Thuy Hanh said.

In total 100 million dong was raised, enough to cover the expenses of Hung’s medical treatment.

Thuy Hanh said the necklace was created by a Vietnamese-French jeweler who gave it to Minh Hanh not long after she was released from jail herself in 2014. It was given to her when she was campaigning in France for the release of Hung and another labor rights activist, Doan Huy Chuong, who was released in 2017.

Minh Hanh, Chuong and Hung were accused of being involved in public protests that sought proper wages for workers at a shoe factory in Tra Vinh province in 2010. They were jailed for “disrupting national security” that same year. Minh Hanh and Chuong were given seven-year jail sentences. The gold necklace with the shape of Vietnam at its center that was auctioned to help raise funds to help pay for Nguyen Hoang Quoc Hung’s medical bills. (Photo courtesy of Mary Do Thi Minh Hanh)