Recent arrests in Aceh under Sahriah edicts highlights a lost cause, they say 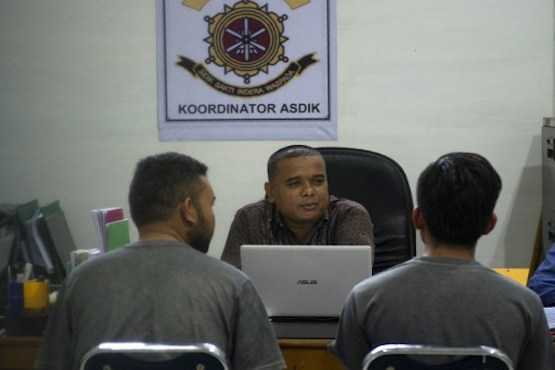 An Acehnese official (center), collects information from two men in Banda Aceh, who face up to 100 strokes of the cane if found guilty of breaking Shariah regulations in this April 10 photo. Indonesia's Aceh looks set to cane two men who admitted having sex in contravention of Islamic laws, the first such punishment of a gay couple in the conservative province. (Photo by Chaideer Mahyuddin/AFP)

The gay community in Aceh may as well admit defeat and abide by Shariah law, a gay activist has said following the recent arrest of two gay men in Indonesia's only province that follows the strict Islamic law.

"We will have to follow what is stipulated in Shariah law," said Hartoyo, a gay rights activist who goes by one name.

"There is no other option for us. To take up the fight or do advocacy is very hard. We have to be considered as sinners and the cause of social problems. It makes most LGBT people choose to stay hidden," he added.

On March 31, two gay people in Banda Aceh were arrested for allegedly having same-sex relations. It was the first arrest and detention of LGBT people since Shariah was enacted in October 2015.

The men, aged 21 and 23, were handed over by villagers in Rukoh to police on March 29, according to Marzuki, an official from the provincial Shariah police force.

He said the case has been submitted to the Shariah court. "The evidence and witnesses have been quite convincing," he said, adding that both men could receive 100 lashes, as stated in the Qanun (religious law).

Hartoyo said what happened to both men was similar to his experience in 2007. An incident that made the Aceh-born activist,Hartoyo, move to Jakarta.

At the time, Hartoyo said, when he was still working as rights activist in Aceh, he and his partner were hugging in their dorm room when the door was broken down. In 2007, Shariah had not yet been implemented so they were not taken to the religious court. "But we were tortured, including being forced to strip naked by the police," he said.

"After Shariah law was implemented the situation became worse," he said.

"There are friends who later committed suicide because they were not able to stand the social burden," he said.

Since its implementation in Aceh, Shariah has sparked concerns. Bonar Tigor Naipospos, deputy chairman of human rights watchdog Setara Institute said, "The implementation of Shariah law is an institutionalized form of discrimination and inhuman punishment," he said.