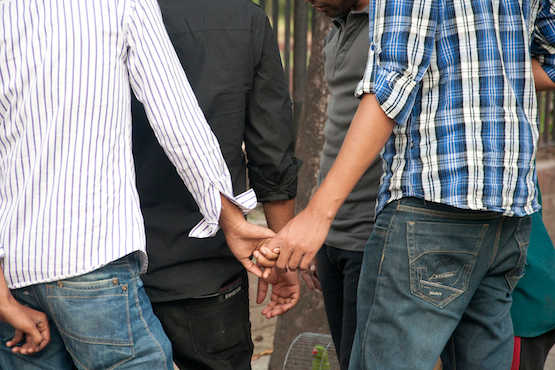 A gay couple seen in Dhaka in this 2011 file photo. Rights activists have called for end to the discrimination of LGBT people in Bangladesh, prompted by recent killing of two LGBT activists. (Photo by Stephan Uttom)

A senior Catholic official in Bangladesh has joined rights activists in condemning the murders on April 25 of two leading lesbian, gay, bisexual and transgender advocates.

They also called for an end to what they call rampant discrimination against the LGBT community.

Suspected Islamic militants hacked to death Xulhaz Mannan, one of the founders of Bangladesh's first and only LGBT magazine Roopbaan and Mahbub Rabbi Tonoy, an actor and fellow gay rights activist in the capital Dhaka.

Ansar Al Islam, a local militant group allegedly linked to al-Qaeda in the Indian subcontinent claimed responsibility for the killings.

The murders were the latest in the series of killings targeting secular and liberal activists including bloggers, publishers and educators in the Muslim-majority nation.

"In this country there is no place for LGBT people. Declaring yourself LGBT can result in the denial of every opportunity and rights as an ordinary," an activist from Boys of Bangladesh, a Dhaka-based gay rights group, told ucanews.com on condition of anonymity.

"We don't do any harm to people or society, yet we face all sorts of abuses and discrimination as if we are dreadful sinners… Now we are being targeted for killing," the activist said referring to the recent killings.

Although the Catholic Church does not support same-sex relations, it does advocate ensuring the rights of all people including the LGBT community, Father Albert Thomas Rozario, convener of Dhaka Archdiocese’s Justice and Peace Commission.

"The church always supports the demands of LGBT people for equal rights and opportunities as ordinary citizens," said the priest who is also a Supreme Court lawyer.

"We call on the authorities to ensure justice is meted out for the killings, and also to take steps to end discrimination against this community," he added.

"God has given us freedom of choice and nobody is allowed to persecute people for their sexual orientation because of so-called traditional values based on conservative religious norms. A truly democratic society can't accept abuse in the name of religion," Costa told ucanews.com.

"A proper probe and justice for the killings won't do much protect the community. The government must ensure that the discrimination of LGBT people ends in this country even though the so-called protectors of Islam might not like it," she said.

Christians were unlikely to offer much support to the LGBT community out of fear of reprisals from Islamists, Costa said.

New York-based Human Rights Watch also called for justice over the killings and an end to discrimination of the LGBT community.

"The massacre of two gay men … demonstrates the need for the government to combat extremists preying on minorities,” Meenakshi Ganguly, HRW’s South Asia director said in a statement April 26.

The government should use laws and law enforcement to protect, not harass and prosecute LGBT people, the statement said.

"Dismissing sexual orientation as a non-issue effectively sanctions abuse of an already-marginalized community," it added.