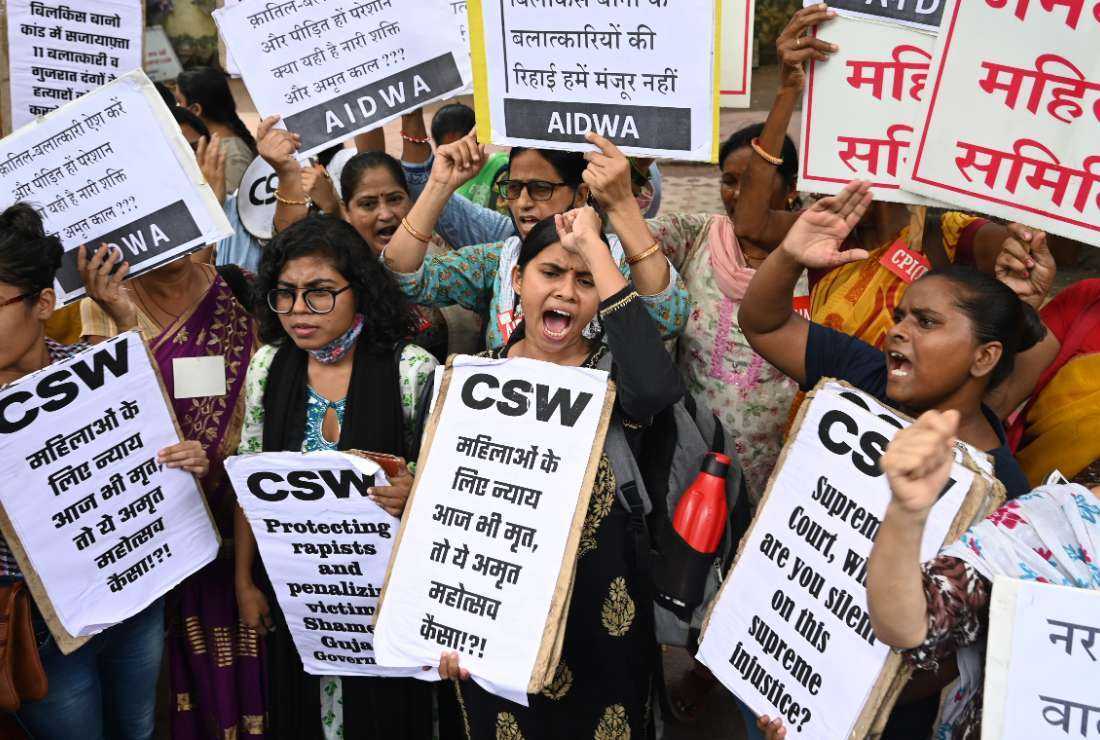 Activists shout slogans and hold placards during a protest against the release, following a recommendation by a Gujarat's state government panel, of men convicted of gang-raping Bilkis Bano during the 2002 communal riots in Gujarat, in New Delhi on August 18, 2022. (Photo: AFP)

A Muslim woman who was gang-raped as 14 other people were murdered during one of post-independence India's worst religious riots has said she is "numb" after her attackers were released early from prison.

In a case that drew global outrage, Bilkis Bano and two of her children were the only survivors among a group of 17 Muslims attacked by a Hindu mob in the western state of Gujarat in 2002.

Bilkis was pregnant at the time and seven of those killed were relatives including her three-year-old daughter. The attack took place when current Indian Prime Minister Narendra Modi was Gujarat state premier.

Eleven Hindu men were later sentenced to life in prison but were freed on Monday, with the Gujarat government timing its announcement to coincide with celebrations for the 75th anniversary of India's independence.

The attackers, released following a recommendation by a state government panel, were greeted by relatives outside the prison who gave them sweets and touched their feet in a traditional Indian sign of respect.

Bilkis said in a statement released by her lawyer on Wednesday that she was "bereft of words. I am still numb."

"I trusted the highest courts in our land. I trusted the system, and I was learning slowly to live with my trauma.

"The release of these convicts has taken from me my peace and shaken my faith in justice. My sorrow and my wavering faith is not for myself alone but for every woman who is struggling for justice in courts," she said.

On Thursday around a dozen people staged a demonstration in New Delhi against the release of the men.

Modi was accused of turning a blind eye to the riots but was cleared of any wrongdoing in 2012, two years before becoming leader of the Hindu-majority nation that is home to 200 million Muslims.

The Gujarat state government, run by the BJP, defended the decision to release the men.

"The remission of the 11 convicts was considered after taking various factors like life imprisonment term in India which is typically of 14 years or more, age, behaviour of the person and so on," senior official Raj Kumar was quoted by the Hindustan Times as saying.

According to the official toll, around 1,000 people, mostly Muslims, were hacked, beaten, shot or burnt to death in the riots, which erupted after 59 Hindu pilgrims died in a train fire that was blamed on a Muslim mob.

More than three dozen Muslims were later convicted over the fire, although the cause remains disputed.