Paramilitary police in China where the authorities have detained hundreds rights defenders since July. (Photo by Gaston Laborde/pixabay.com)

A Christian lawyer paraded on television to "confess" after six months in police custody in the city of Wenzhou has been criminally detained pending possible charges, ending hopes he was about to be released.

Zhang Kai was informed of his criminal detention on Feb. 26 following a confession aired the previous day in which he said he was "deeply remorseful." He angered authorities in Zhejiang province after helping churches targeted as part of a widespread cross-removal campaign.

"It is not clear what is going to happen to him next," Zhang's parents said in a statement posted on Chinese social media on Feb. 28. "We believe Zhang Kai is innocent and we hope the government can respect his rights that the law has guaranteed."

Zhang's case has caused an outcry from rights groups, Christians and Western governments, including the United States — Secretary of State John Kerry has urged Beijing to free Zhang immediately.

Bob Fu, director of U.S.-based China Aid who was part of a deal that saw blind lawyer Chen Guangcheng leave China in 2012 following his daring escape from house arrest, was among those who expressed hope Zhang was about to be released after his video confession.

According to Chinese law, detainees can be held for six months without charge and must then be released or criminally detained pending official charges.

"People used legal means to fight for their rights but they received criminal charges in return," said Or Yan-yan, project officer at the Catholic Justice and Peace Commission in Hong Kong. "This crackdown is on the whole of civil society, not just on Zhang Kai or other human rights lawyers."

Wenzhou's Public Security Bureau has told Zhang he might be freed in one month but could face as yet unspecified charges if he does not comply with authorities, ucanews.com understands.

Wenzhou police told Zhang in September that he was suspected of "gathering a mob to disturb public order and stealing, collecting, purchasing and illegally providing state secrets and intelligence to overseas organizations" — accusations replayed in his video confession.

Zhang, a lawyer at the Beijing Xinqiao firm, last year helped churches in Zhejiang use China's own laws in a bid to rebuff authorities amid a campaign that has seen more than 1,700 crosses removed in the province since the end of 2013. 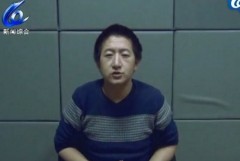 Following his detention in late August, authorities barred Zhang from seeing his lawyer and then in early December issued a notice purportedly handwritten and signed by Zhang in which he dismissed his defense attorney.

Chinese law states that detainees are guaranteed access to a lawyer but in practice this right has increasingly been denied despite President Xi Jinping's recent "rule of law" campaign.

Zhang's case follows a string of recent televised confessions in China by detained rights defenders amid a crackdown on lawyers and their families in which more than 200 people have been detained since July.