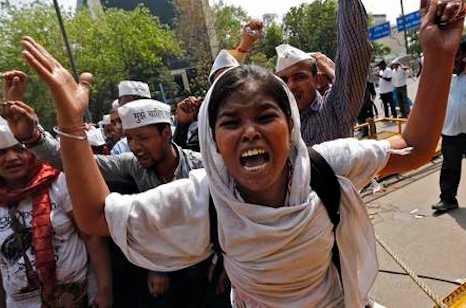 Protesters have staged a second day of rallies in Delhi in protest at the brutal rape of an abducted five-year-old girl.

It was the latest in a string of attacks on females that have brought thousands on the streets of India's capital, angry at the way women are regularly subjected to violence.

The girl is being treated at Delhi's top government hospital where officials said she was in "stable condition".

The attack on the young child and the subsequent public revulsion was reminiscent of the horrifying gang-rape of a 23-year-old student on a bus last December, who died from her injuries.

That case led to weeks of protests and a national debate over the status of women in India, putting the spotlight on the level of sexual violence.

The girl suffered serious internal injuries during a two-day ordeal, allegedly at the hands of a garment worker who was arrested on Saturday.

"She is conscious and talking to her parents, doctors and nurses and it can be said there is no danger to her life now."

Demonstrators carrying flags and posters gathered outside the the city's main police headquarters for a second day of protest.

Another group headed to the hospital where the young victim girl is under round-the-clock observation.

The Times of India reported that many people sat in the road and sang songs as the police erected barricades to keep them in check.

Many called for the sacking of Delhi police commissioner Neeraj Kumar after it emerged two police officers have been accused of delaying an investigation into the case.

He said: "It is widely accepted that, as a country, we have vast improvements to make in these (safety, security and status of women) areas. These issues came into sharper focus after the horrific gang rape incident in Delhi last December.

"The gruesome assault on a little child a few days back reminds us of the need to work collectively to root out this sort of depravity from our society."

The 22-year-old suspect, said by media reports to be a tenant in the child's house, was apprehended after he fled to his in-laws' home in the eastern Indian state of Bihar.

He is accused of repeatedly attacking the child inside a locked room after kidnapping her on Monday in a lower middle-class area of Delhi.