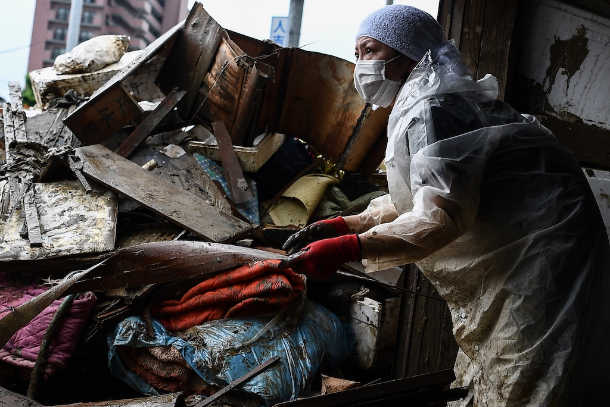 A resident clears debris from a home during the clean-up process in Hitoyoshi, Kumamoto prefecture, on July 10 after heavy rains and flooding devastated the region. (Photo: Charly Triballeau/AFP)

Church people are mustering resources to help victims of floods that washed away houses and roads as unprecedented heavy rains lashed Japan's main island Kyushu for the past week.

At least 60 people are dead and some 40 are missing after the record-breaking rains that have battered the area since July 4, Bishop Josep Abella of Fukuoka said. "The damage has been quite big and, unfortunately, the heavy rains are still continuing," he told UCA News on July 10.

As swollen rivers overflowed and swamped farmland and residential areas, roads and houses were destroyed, throwing people out of shelters.

Some three million people have been evacuated to safer places. The Japan Meteorological Agency has issued extreme weather warnings in more than 20 municipalities of Gifu and Nagano prefectures, reports said.

Bishop Abella said damaged structures include churches but more serious is that people have lost their homes, workplaces and crops.

The bishop said detailed information on the damage suffered by church communities, parishes institutions is not yet available.

"We are especially worried about foreign workers who may not be able to understand government instructions in the local language and who do not have their families at hand to help them," he said.

Fukuoka Diocese, which covers one of the worst-hit areas, has started a donation campaign to collect funds to help needy people.

Bishop Abella said Covid-19 restrictions do not allow them to organize volunteer programs to help those in need. "We try to facilitate the participation of the people in programs organized by the authorities," he said.

He said weather forecasters are warning of similar situations in other parts of the country too. "We have already witnessed some floods in some areas of the dioceses of Oita, Kagoshima and Nagoya," the bishop said.

Reports from Oita prefecture said that a vehicle with four passengers was washed away after the Chikugo and Oita rivers flooded in the early hours of July 8, Kyodo News Agency reported.

At least 20,000 rescue workers have been pressed into service to reach survivors stranded by flooding and landslides.

However, the Covid-19 pandemic has hampered rescue operations because of the need for social distancing, reducing shelter homes' capacity to house flood victims.

Japan is relatively less hit by the pandemic, with just under 20,000 positive cases and fewer than 1,000 deaths.

In Yatsushiro in Kumamoto prefecture, a sports gymnasium has been converted into a shelter, with families separated by temporary walls to maintain social distancing.

Japan is passing through its annual rainy season, which frequently results in floods and landslides. In 2018, more than 200 people perished in a devastating flood in western Japan.