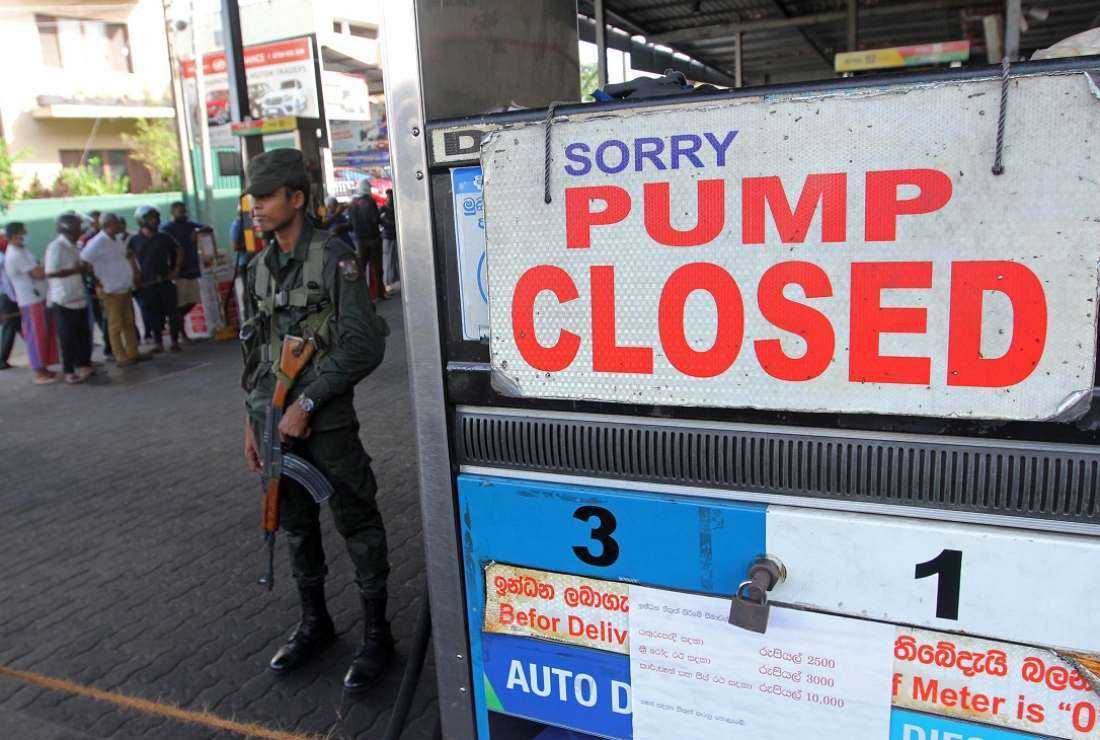 A security officer stands guard outside a fuel station that ran out of gasoline in Colombo on June 27. (Photo: AFP)

The Sri Lankan government’s decision to limit fuel only for essential services has affected the lives of schoolchildren and the general public.

The government decided to issue fuel only for essential services with effect from June 28 and the move has led to inaction in many sectors. The education system, the private sector and many government agencies have been affected.

Ave Maria Convent in Negombo, run by the Good Shepherd Sisters, sent a message to teachers and students through social media that the school would be closed from June 28 to July 10 due to the fuel crisis.

"Since the government has suddenly decided to close schools, we had to declare holidays from June 28 to July 10. We will inform you of how the lessons will be taught shortly," said the school management team.

Church-run St. Joseph College in Negombo also closed due to the lack of fuel and transport difficulties.

"Considering the current situation of the country, especially the lack of fuel and difficulties in transportation, the school has decided to begin online classes," said rector Father Carlton De Silva.

"There will be no physical classes. For the upper school, online classes will begin from June 29 and a special timetable will be sent."

Sri Lanka is reeling from its worst economic crisis since independence in 1948 as foreign currency shortages due to the mishandling of the economy hamper the regular import of essential items.

Widespread protests against the powerful Rajapaksa family and the government demanding the resignation of President Gotabaya Rajapaksa intensified at the end of March.

Many congested cities are now deserted. The main commercial city of Colombo is also in a state of extreme desolation.

Due to the fuel crisis, academic activities of many universities have been suspended until further notice.

Post offices will be open only three days a week until further notice in the face of the crisis.

The Registrar General's Department has decided to restrict the services of all its regional and district offices to Mondays and Wednesdays.

Upul Rohana, president of the Public Health Inspectors’ Association, said members are on strike to protest against the government's inability to resolve the fuel crisis.

Cardinal Malcolm Ranjith has asked the government how the gold stocks in the central bank disappeared and why were these wasted irresponsibly, calling for an investigation into the matter.

The Bar Association of Sri Lanka urged the government to provide the public with timely and adequate information on plans to ensure a short-term uninterrupted supply of fuel and to present a roadmap to save the country from the economic crisis.