Catholic-run shop serves 700 a day with no public funding 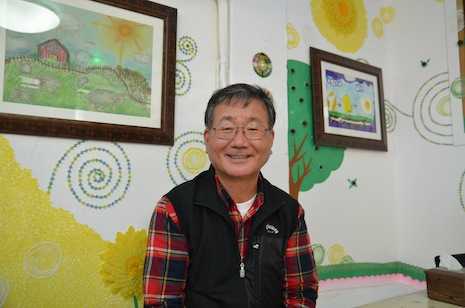 In Korea, the owner of any small noodle shop would be more than happy to get 700 customers a day. That’s how many they serve at the Mindlele Noodle Shop, in a shanty town in the western harbor city of Incheon.

The difference is, the customers are homeless and the noodles are free.

Peter Seo Young-nam, 60, set it up on April 1, 2003. with just a table for six in a 10 sq.m. shop. As well as growing in size it has also expanded its menu so it now also offers rice, soup and several side dishes.

The shop has a wide number of willing supporters. Some provide it with rice or vegetables or meat, while some simply send money. Seo himself is one of the volunteers who cook the food and serve the customers.

Seo does not look for government subsidies, aid programs or wealthy sponsors. “Our shop imitates Dorothy Day’s famous House of Hospitality providing shelter, food and clothing to those who need it,” he says.

“I follow that model without public funding. I’ve found that there are many good people who will help us anonymously. It’s shown me that God really exists in ourselves.”

There must be times when he wishes he had looked for some of that public help, for feeding 700 people a day is not easy.

“We’ve had hard times,” he says. “One day we had no rice and we almost couldn’t open the shop until a supporter turned up with a sackful. Every time trouble crops up, support from a neighbor comes too. It’s God’s providence, I guess.”

Seo is clearly a man of great principle. When he was 22, he entered the Clerical Congregation of Blessed Korean Martyrs. But after 25 years of Religious life, he abruptly left at the age of 47, in 2000.

“I entered the congregation for a poor but honest life. But I found I was living a comfortable, snobby life,” he says.

After leaving, he rented a house in Incheon where he lived with a group of ex-prisoners he had met during his correction ministry. From there he opened Mindlele. The name means ‘dandelion,’ which is perhaps appropriate as the original seed of the idea has spread widely.

In 2008, Seo started a basic education facility for children of poor families. That was followed by a free cafe for the children.

At around the same time, he opened a support center where homeless people can rest, shower and wash their clothes. The center provides free medical and dental checks as well as a free clothing store.

Since a TV documentary was aired about Seo and his work, his name has spread too. And even though he eschews seeking sponsorship he has won several awards, including the National Medal of Seokryujang, and these often come with prize money. With the National Medal purse, he extended the noodle shop and started a scholarship program for 124 children in the ‘garbage city’ of Payatas in the Philippines’ Quezon City.

Now, he is working on a free noodle shop there, which he hopes will be open by next April.

“As dandelion seeds fly all over the place and take root, I hope the Mindlele style of sharing spreads across Korean society so people can live a happy life. That’s all I want,” he says. “The rest depends on God.”