From tea leaves to opium

In Myanmar's Shan state, the Palaung minority bears the brunt of drug wars The 300 or so residents of Pang Ku village are crammed into the small outbuildings of a Buddhist monastery in Kutkai town. The ethnic Palaung villagers are just 10 kilometers from home, but these modest lodgings offer sanctuary from the tit-for-tat fighting that has occurred in the village since December.

“At the moment there is no fighting in the village, but the militia is based there,” said 43-year-old Daw Ma Mwan, a mother of seven children. A de facto leader of the displaced community, she said a government-backed group known as the Kaung Kha militia was attempting to push the Ta’ang National Liberation Army (TNLA) from the area around the village.

Pang Ku’s residents moved to the monastery in February, in the middle of the six-month dry season when opium is harvested in this hilly part of northern Shan state — the home of most Palaung, who also call themselves Ta’ang.

For centuries, the mostly Buddhist group — who belong to the Mon-Khmer ethnolinguistic family — subsisted by growing tea in the hilly reaches of northern Shan state. But locals and activists say the opium trade has now come to dominate the region, and is a major factor fueling the current conflict.

The fighting in Palaung areas is part of a larger upsurge in violence this year in northern Shan state. That clashes have centered on areas linked to narcotics supply chains suggests that the country may have to kick its drug habit before it can achieve true peace.

Some respite from bitter fighting in Shan state has been brought about by the annual monsoon rains, rather than by the political efforts of President Thein Sein’s peace negotiators. A draft Nationwide Ceasefire Agreement was signed in March, but a meeting of ethnic leaders near the Myanmar-Thai border this week to discuss the pact has only raised further difficulties.

The administration has said that three groups involved in the most serious recent fighting may not be included in the agreement. The three groups in question are the ethnic Chinese Kokang fighters of the Myanmar National Democratic Alliance Army, the Arakan Army and the TNLA.

The Kokang region to the east erupted in fighting in February. The Myanmar army has intensified its attacks, employing air strikes and heavy artillery against all three armed groups, who are reportedly coordinating their activities in the region.

The TNLA had little presence when fighting broke out in nearby Kachin state four years ago this week. The war has raged on and off ever since, displacing more than 100,000 civilians and spreading south here to Palaung areas, where problems of drug cultivation and abuse swirl with land issues and poverty. 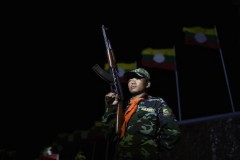 Daw Ma Mwan’s now-abandoned village was part of this turf war between the government-backed militia and TNLA fighters.

“The TNLA already came to the village to carry out an opium education program. The militia were not happy about that,” Daw Ma Mwan said. “There are no opium fields in our village, but there is drug use. The TNLA talked to people about the dangers of drugs, so the militia attacked them because they want to sell drugs to the villagers.”

Some villagers also work in nearby opium fields, which they say are under the protection of militia groups. A 23-year-old woman, who asked not to be named, recounted her experience working for a Chinese-owned opium plantation. She said two hectares of poppy had been planted in a remote mountainous area, and dozens of local people were paid 5,000 kyat (about US$5) per day to work the fields during the harvest.

“We would scrape the poppy bulbs so the resin came out. Then we collected it up,” the woman said. “I never saw what happened to the opium afterwards.”

The opium crop from the Palaung region, combined with what is produced in other areas across this part of Myanmar, is the world’s second-largest opium crop, after Afghanistan. The United Nations’ anti-drug agency says that opium cultivation in the Golden Triangle area has tripled since 2006, mostly because of new poppy fields in Shan state. Raw opium is manufactured into heroin and makes its way either to China or onto the international market via Thailand or Laos.

Lway Poe Ngeal, an activist with the Ta’ang Women’s Organization, said it was common knowledge locally that government-aligned militia groups — including one group headed by a member of the national parliament — were running the opium trade in Palaung areas.

Across Shan state, more than 1,000 so-called People’s Militia Forces are given support by the government in exchange for suppressing ethnic armed groups. These bands of armed men must find ways to fund themselves, and often turn to illegal means.

The drug trade is exacerbating the conflict, Lway Poe Ngeal said, but it also means that drugs are easily available, taking a heavy toll on the local people — especially the youth. “Tea now only gets a very low price for farmers. We can’t afford to do it anymore,” she said. “In the past, one small tea plantation could support a family. But other countries don’t buy tea leaf from here anymore, and China is selling very cheap tea leaf to Myanmar.”

As a result, she said, “Some [Palaung] people shifted to opium, but they don't own the land, they just work it.”

Perhaps more important than the price of tea, the Palaung and other ethnic minorities living in this part of northern Shan state have been hit by land grabs. A recent report by UK-based group Global Witness focused on land seizures by the military in northern Shan state’s Lashio township, adjacent to Kutkai.

In Lashio, some 6,100 hectares of seized land, later designated as “vacant or fallow”, was allocated to individuals or companies in 2010 and 2011 for use as commercial agriculture — namely rubber plantations.

The Global Witness report describes a “toxic legacy of these land grabs on the local population, for whom little has changed since the country’s much-lauded transition to civil democracy”.

Similar land grabs are thought to have been conducted elsewhere in northern Shan state. These may well have provided opium traffickers with both land for their crops and a steady supply of labor from now-landless locals.

Self-rule in name only

In 2005, Palaung rebels, then under the auspices of the Palaung State Liberation Organization, disarmed after a more than decade-long ceasefire with the government. In 2008, the ethnic group was granted a “self-administered zone” covering three townships where a large number of the Palaung population lives.

However, locals say the zone was granted self-rule in name only. And the TNLA has grown in strength, expanding its area of influence in recent years, a rarity among Myanmar’s embattled ethnic armed groups.

Mai Myo Aung, secretary of Ta'ang Students and Youth Union, told ucanews.com this week that sporadic clashes are ongoing in the region.

With ever growing numbers of government troops entering the region to fight in the Kokang area, there is no sign of let up, he said. Continued fighting also means the government must continue to rely on militia groups to prop up its rule in the hills.

“Sometimes I think the government’s neglect — letting local militia grow opium and not eradicating the drug trade — is a weapon in itself in ethnic areas,” Mai Myo Aung said. “It is destroying the life of our young people.”