From lofty dreams to brutal deaths 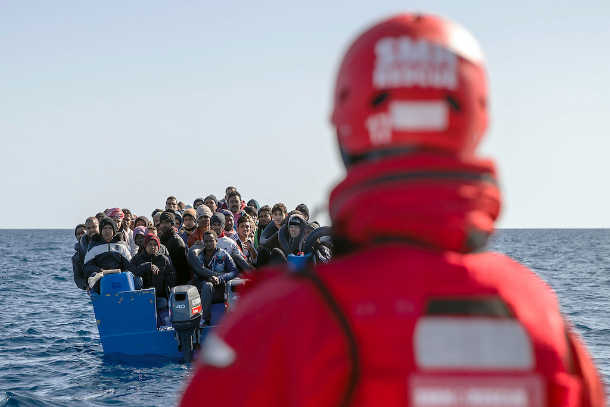 Migrants from Bangladesh, Afghanistan and Pakistan wait to be taken to Spanish NGO Maydayterraneo's boat during the rescue of 65 migrants in the Mediterranean Sea off the Libyan coast on Feb. 10. (Photo: AFP)

The brutal killing of 26 Bangladeshi and four African men in Libyan desert town Mizda by a mafia gang has grabbed global attention over the scourge of human trafficking.

Another 11 Bangladeshis, seriously wounded in the attack on May 28, were admitted to hospital.

The horrific tragedy sent shockwaves across Bangladesh and triggered a massive media and public outcry. This was the worst massacre of Bangladeshi people in a foreign land since the country’s independence from Pakistan in 1971.

Requests from families and relatives to bring back the bodies to Bangladesh fell on deaf ears and the victims were reportedly buried where they were killed.

Media investigations revealed that the dead and the injured were victims of people smuggling and most of them were headed for Italy, which is just across the Mediterranean Sea from Libya.

Bangladesh stopped legal migration to Libya since the start of its civil war after the fall of Moammar Gadhafi in 2011, yet traffickers continued to operate effectively to smuggle Bangladeshis time and again.

The latest revelations prompted a manhunt by police and an alleged kingpin, Kamal Uddin ails Haji Kamal, accused of trafficking hundreds of Bangladeshis to Libya since 1997, was arrested.

Kamal, 55, is known as a haji who made the hajj pilgrimage to Mecca, philanthropist and respected man in his village in Kushtia district of western Bangladesh.

Lawmen alleged that Kamal used his tile and construction business as a front for human trafficking.

In a video interview, Tarikul Islam, one of the massacre survivors, recalled how he paid 450,000 taka (US$5,294) to one of Kamal’s agents and joined a group of 30 men who traveled from Bangladesh with valid passports and tourist visas via Nepal, Dubai and Egypt to finally reach Benghazi in Libya six months ago.

The agent in Libya sold them to a mafia gang on the way to Tripoli from Benghazi and they were locked up in a camp with another nine Bangladeshi men and dozens of Africans including Sudanese and Egyptians.

The mafia gang demanded US$12,000 from each of the inmates for their release and brutally tortured them with electric shocks and beatings with iron pipes every day. They were not given enough food and water, so some of them died.

Presumably frustrated over their confinement and abuse, a group of inmates attacked and killed one of their captors. Retaliation came with a barbaric revenge attack which left 30 murdered by machine gun fire.

Such savagery is a tragic result of the unbridled scourge of human trafficking inflicted on poor people from Bangladesh and elsewhere.

The Libyan tragedy might be one of the most heartbreaking incidents of trafficking in years, but it is just the tip of the iceberg and not without precedent.

In April, boatloads of Rohingya Muslim refugees from Bangladesh and Myanmar were forced to return to their port of origin after failing to enter Malaysia by dangerous sea voyages. They drifted at sea for two months and at least 60 died on board.

In May last year, about 60 migrants including 37 Bangladeshis died after a boat capsized in the Mediterranean Sea as it headed for Italy with dozens of people.

Memories are still fresh of the 2015 Asian boatpeople tragedy, which triggered a global outcry due to the plight of thousands of Bangladeshis and Rohingya Muslims left abandoned and stranded in the Andaman Sea by traffickers.

Amid a massive crackdown, most Bangladeshi traffickers went into hiding, but it seems they have returned in force amid a lull in monitoring since then.

It is obvious why persecuted Rohingya take risky voyages to escape abuses in Myanmar and hopelessness in Bangladeshi refugee camps.

In Bangladesh, endemic poverty and unemployment force thousands to do the same for a lofty dream — migration to Europe, legally or illegally.

Many of these people have family members and relatives in European countries who promised them a better life once they reached Europe by any means. People smugglers cash in on this dream and put them in grave danger.

In 2019, about 21,600 people, mostly Bangladeshis, entered Europe illegally through Italy and Greece and 17,000 made it by sea, according to migration experts.

In the past decade, about 100,000 Bangladeshis entered Europe illegally and sought citizenship and political asylum. Such large numbers of illegal migrants enraged the European Union, which threatened that if Bangladesh did not take back illegal migrants, it would stop legal migration from the country.

The problems of illegal migration and trafficking are not much different in several Asian nations including India, Pakistan, China, Myanmar and Thailand, which regularly top various lists of source countries for human trafficking.

Bangladesh stands out among them as its traffickers are relatively strong and well connected with transnational trafficking syndicates. The country also has an extremely poor conviction rate of traffickers. Despite a strong anti-trafficking law, poor mechanisms and enforcement continue to be a boon for people smugglers.

A range of national and international bodies, including the United Nations Office on Drugs and Crime, International Organization of Migration and regional forums, try to combat people smuggling. Most countries have laws and policies to combat trafficking.

The Catholic Church and its social service agency Caritas have been involved in various projects in vulnerable areas to tackle human trafficking and promote safe migration in many countries.

Yet tens of thousands continue to be smuggled each year. In the case of Bangladesh, at least one million people have been trafficked out of the country since 1971, according to Bangladeshi rights group Ain-O-Salish Kendra.

The Libyan tragedy is a warning about the failure of anti-trafficking efforts at national and regional levels. Whether it triggers more awareness, actions and coordination among concerned groups to combat such fatal journeys remains to be seen.

Rock Ronald Rozario is the bureau chief for UCA News in Dhaka, the capital city of Bangladesh. The views expressed in this article are those of the author and do not necessarily reflect the official editorial position of UCA News.